by Matt Sailor
Prev NEXT
6 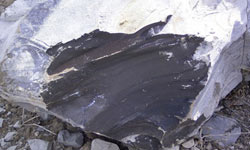 Shale oil is a form of syncrude produced from the rock marlstone.
Argonne National Laboratory

Shale oil is another form of syncrude produced from marlstone, a naturally occurring rock that is commonly called oil shale. Marlstone is rich in a material called kerogen, an organic material that naturally converts into crude oil when it's exposed to extreme heat and pressure. That change usually happens over millions of years, but industrial methods can replicate the process and convert the kerogen in oil shale to syncrude [source: U.S. Department of the Interior]. Production of shale oil is largely theoretical at this point and hasn't been produced on a large scale. Oil shale can be put through pyrolysis, the introduction of heat and removal of oxygen, which separates the kerogen from the rest of the rock and converts it into a liquid that can then be refined into syncrude [source: U.S. Department of the Interior].

Oil shale is extremely abundant. In fact, deposits in the Green River Formation, a region that extends through parts of Colorado, Utah and Wyoming, could contain enough oil shale to produce 800 billion to 1.8 trillion barrels, according to estimates from various scientists [source: U.S. Department of the Interior]. To put those numbers in perspective, if the lower estimate were accurate, the formation could supply the United States' oil needs for 100 years at current usage levels [source: U.S. Department of the Interior]. However, there are serious environmental drawbacks. Shale oil production leaves large amounts of waste rock behind and uses huge amounts of water. Also, until technologies are further developed and refined, the process is extremely expensive -- much more expensive per-barrel than crude oil production [source: U.S. Energy Information Administration].