by Dave Roos
Prev NEXT
2

Putting the "Eco" in Economic Impact 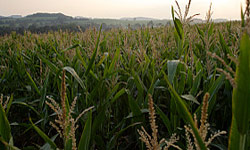 A rural farmer could use a homegrown corn crop to lift his family out of poverty and help save the world at the same time. Pretty cool, right?
Asia Images/Getty Images

Slightly less than half of the world's population lives in rural areas, but they make up 70 percent of the world's poor [source: The World Bank]. For decades, the plight of poor rural farmers has been exacerbated by low food prices. The global market for food staples like wheat and corn was dominated by the United States and Europe, where government subsidies kept prices unnaturally low. A country like Mexico, which used to feed itself on its own corn, now imports 12 million tons (10.88 billion kilograms) a year from the U.S., where corn prices are lower [source: Rodriguez].

Oil is the same. Of the world's 47 poorest countries, 38 import more oil than they produce domestically and 25 of those 38 countries import every drop of oil they consume [source: Worldwatch Institute]. With an overreliance on both foreign-grown food and foreign oil, the rural poor in developing nations are dangerously exposed to price spikes. When food and oil prices go up, as they have dramatically in recent years, they suffer the consequences without any of the benefits.

Homegrown biofuels have the potential to reverse the poverty rate in developing nations. Think of the hundreds of millions of farmers who can barely subsist on the market price of their food crops. By growing ethanol and biodiesel feedstock, they will receive a fair price for a hot commodity. At the same time, energy entrepreneurs in their same country can build the biofuels infrastructure to generate homegrown energy. A 2010 report from the International Food Policy Research Institute concluded that increased biofuel production in countries like Tanzania and Mozambique could decrease the poverty rate in those countries by 5 percent by 2020 [source: Arndt et al].