by Dave Roos
Prev NEXT
4

Fill 'Er Up with Pond Scum 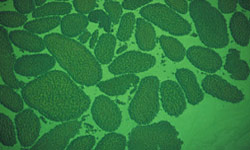 Pond scum may look gross, but who said the future of biofuels had to be pretty?
Cameron Davidson/Getty Images

Starting as early as the 1950s, alternative energy researchers have had their eyes on algae [source: Keune]. Mature algae -- that slimy green goo also known as pond scum -- are rich with lipids, a type of molecule that includes fats. Those lipids can be extracted and turned into biodiesel. The remaining dry algal matter can be fermented and processed into ethanol [source: Haag]. Two fuels for the price of one!

Algae need three things to grow: water, sunlight and carbon dioxide. Otherwise, they're not very picky. Algae can grow in salt or fresh water, even in wastewater from sewage treatment facilities or dairy farms. The key to growing great algae is lots of available carbon dioxide in the water. Naturally occurring ponds don't usually contain enough carbon dioxide to maintain healthy growth rates, but researchers have figured out an ingenious solution: redirecting carbon dioxideemissions from coal-fired power plants into the algal ponds. Not only does algal biodiesel burn cleaner than conventional gas, but it eats up coal emissions.

Under the right conditions, algal colonies can double in mass overnight, and an impressive 50 percent of that mass is oil. To compare, the second best oil-producing plant is the oil-palm tree, which is only 20 percent oil [source: Haag]. The U.S. government has invested tens of millions of dollars to help bring algal fuels to market, but current production methods still cost a prohibitive $8 a gallon at the pump. The hope is that with further investment by the United States military and energy giants like Exxon Mobil and Chevron, algae will become both an environmental and economic superfuel.