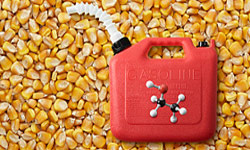 Where does your gasoline come from?
Paul Eekhoff/Getty Images

Pumping gas is an excellent time for existential contemplation. Next time you're topping off the tank, think about where that gasoline came from. Saudi Arabia? No, let's go back even farther: Your gasoline began its life 300 million years ago as a leaf of ancient seaweed or a prehistoric shark with a heart condition. When that shark died and that seaweed shriveled, they decomposed on the ocean floor. Over the millennia, as more and more organic matter settled on top of the shark and seaweed, the pressure and heat converted the carbon from those dead creatures into the viscous goo we call crude oil.

That's where Saudi Arabia comes in. The ancient crude is pumped from the earth, shipped by supertanker to a refinery in Texas and converted to gasoline (and diesel fuel and jet fuel and the occasional vat of Vaseline).

As you are contemplating this 300-million-year production cycle, consider the energy that was required to crush that carbon into crude, and then the fuel required to dig the oil wells, pump the stuff, ship it halfway across the world, refine it, load it onto trains, then trucks, finally to arrive at your local filling station. There must be more direct and energy efficient and environmentally sound ways to transform carbon-based matter into fuel? There are, and they're called biofuels.

Biofuels are any form of energy derived from a plant source. The most common biofuels are ethanol, an alcohol fuel made from fermenting a sugary source material like corn or sugar cane, and biodiesel, a diesel fuel made from vegetable oils and fats rather than crude oil. When the feedstock for biofuels is grown and harvested in a responsible, sustainable way, the benefits of biofuels impact more than the price at the pump. Biofuels have to potential to reduce pollution, reduce global poverty, and convert millions of tons of waste into clean-burning energy.

Here is our list of the five ingenious ways that responsibly produced biofuels can benefit everyone, starting with a switch from corn-based ethanol to "grassoline."