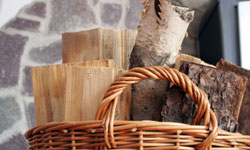 Technically a biofuel, wood can heat your home, boil water and even allow you to cook a meal -- all without electricity.
Hemera/Thinkstock

You hear the word biofuel, and the first things that may come to mind are the guys who run their cars on fry grease and make the local news every time gasoline breaks $3 a gallon.

The pioneers who are developing non-automotive uses for biofuels are a lot like those guys. They collect fry grease. They build unconventional generators. They do everything they can to live without depending on utility companies. Like the fry guys, they're far from mainstream.

Let's look at some of the things these folks work to achieve -- without a gas line or a power pole anywhere in sight.

This is perhaps the most obvious use of a biofuel, and most people wouldn't even think of their wood stove or fireplace in such trendy terms. But wood is, in fact, a biofuel.

According the U.S. Census Bureau, more than 2 percent of U.S. households reported that they heated their homes with wood, solar energy or other fuels in 2000. Of course, anyone who has tried to live by the heat of a wood stove knows that there's more to it than lighting a fire.

The Wood Heat Organization, a nonprofit organization dedicated to helping people safely heat their homes with wood, recommends using stoves and installers certified under National Fireplace Institute training programs. The organization also recommends woodstoves as the cheapest and most efficient way to heat a home with wood.

As far as the type of wood goes, avoid any variety with the word "poison" in its name (this is probably a given), and make sure the wood is good and dry to keep the smoke down.

To ensure your family's safety, make sure that the stove itself is certified, the chimney is correct for the appliance and the roofline, and you've either gotten good advice on installation from someone reliable or had the system professionally installed. Also, don't forget to bury the ashes once they've cooled.

Pumping Water from a Well 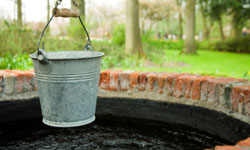 With a biofuel-powered pump, you can skip tugging a bucket up and down as with wells of the past.
Hemera/Thinkstock

If you want to earn your stripes as a true off-the-grid biofuel user, then pumping your own water is an activity sure to get you there for several reasons.

First of all, you're not connected to a city water utility. Second, your generator has produced enough juice to save you the task of carrying water from the well. And third, you've built a pump that's not going to drain the generator.

Steve Spence did this at his homestead in upstate New York. After working with several different pumps, he reported in his blog at Green-Trust.org that he was pleased to have found a piston pump that could be cranked, pedaled or connected to the power system run off his biofueled generator.

Just because you're off the grid doesn't mean you don't have friends to communicate with. If nothing else, you want to get on the Internet to let your compatriots know about the latest breakthrough in lowering the voltage on your Christmas lights. Plus, you want the convenience of charging your phone and laptop wherever you go.

Recently, chemists from Saint Louis University developed a fuel cell that uses sugar and cooking oil byproducts to generate electricity. In the future, consumers may be able to use these types of cells in place of batteries to power anything from cell phones to computers. While the cells are still in development, they have the potential to become a very versatile power source.

Reducing the Cost of Importing Oil 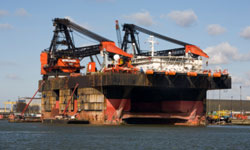 An increase in the production and use of biofuels can help the U.S. reduce its reliance on imported oil.
iStockphoto/Thinkstock

Nonetheless, despite a skyrocketing increase in oil consumption since 1980, the country started to see decreases in 2006. Biofuels are the greatest component in that reduction, according to the U.S. Energy Information Administration. The agency reports that renewable energy consumption has risen steadily -- 15 percent since 2007.

Analysts say that the key is not so much to replace imports with biofuels and other forms of renewable energy, but to stabilize the economy in the event that the supply of imported oil is disrupted. In other words, it's not a matter of reducing how much we spend on imports, but on stabilizing the overall economy with new fuel supplies should those imports stop.

The idea that the oil supply is going to run out has its supporters and detractors. Like most money-charged topics, the answer depends on who you ask.

Most intelligent analyses come to the conclusion that, regardless of whether there's a specific date at which consumption exceeds supply, the biggest threat lies in whether the supply lines are stable. Can the fuel be extracted without environmental disaster? Can it be transported safely? Will extraction and supply be threatened by war or political instability?

The most recent threat to the supply has come from the industrialization of China, which has stepped up the need for production. That development has spurred the U.S. government's aggressive incentive programs to develop efficient processes to produce biofuels.

Meanwhile, if you're looking to run your refrigerator, lights and phone off biofuels, you'll have to join the community of hobbyists and off-the-grid lifestyle advocates and do it yourself. The Internet is rife with their advice and how-to guides. The wherewithal is something you'll have to find for yourself.

Click to the next page for lots more information on biofuels.