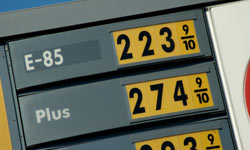 Different fuels have different energy content per gallon, so they have to be compared by the average price per unit of energy.
©iStockphoto.com/Jim Parkin

Biofuels -- fuels made from biological raw materials -- continue to be the focus of intense research, but so far they haven't come close to replacing petroleum and petroleum diesel made from crude oil. Because different fuels have different energy content per gallon, you can't simply compare the price-per-gallon, but instead need to compare the average price-per-unit-of-energy. And in late 2010 in the United States, gasoline cost on average about $2.78 per unit, while ethanol cost about $3.45 for the same amount. However, you'd pay about $2.86 for biodiesel [source: U.S. Department of Energy]. While biofuels may one day become inexpensive fuel sources that are better for the environment than fossil fuels, they also present challenges: The production of some low-cost biofuels may cause unintended environmental damage. Researchers are exploring "next-generation" feedstocks such as algae and grasses, but these are still expensive to produce. In the meantime, there are biofuels available that are relatively easy on the wallet and we'll explore five of them here. 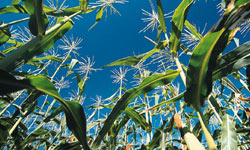 Some opponents of corn ethanol say producing it on a large scale could cause a shortage of corn for food.
Digital Vision/Thinkstock

Corn is just one of the many raw materials, or feedstocks, that can be converted into ethanol and used for fuel. As of 2010, 187 facilities in the United States were producing ethanol, most of them using corn as feedstock [source: Renewable Fuels Association]. Corn ethanol can cut greenhouse gas emissions, but because it contains less energy than gas, a vehicle running on this biofuel would get significantly lower mileage than one running on gasoline. Producing corn ethanol on a large scale could also create a shortage of corn for food. Corn ethanol is also criticized for creating undesirable environmental effects. Opponents of corn ethanol fuel (and other biofuels as well) argue that when areas such as grasslands and rainforests are converted to provide land to grow corn, the overall result is an increase in greenhouse gas emissions [source: The Nature Conservancy]. And the processing corn into ethanol actually uses a huge amount of fossil fuel. Still, many producers are banking on corn: Currently, about a third of all corn grown in the United States is used to make fuel [source: The New York Times].

Sugarcane's biggest success story began decades ago in Brazil. In response to the oil shortages and high prices as a result of the 1973 Mideast oil embargo, the Brazilian government threw its weight behind sugarcane ethanol. The government required its major oil company to use ethanol, provided $4.9 billion in low-interest loans to encourage companies to invest in it and initially even offered subsidies to make ethanol inexpensive. Today, the subsidies are no longer needed, and more than 70 percent of new cars sold in Brazil are "flex fuel" vehicles, which run on anywhere from 100 percent to 25 percent ethanol [source: Hofstrand]. Millions of acres of sugarcane are grown in Brazil, but many countries, including the United States, don't have this option because they don't have the climate for it like Brazil. Brazil has just the right weather to grow sugarcane, and enough land to grow it in large enough amounts for it to be a good source of fuel for that country.

A range of plant oils have been used to create renewable fuel, with canola, palm and soybean as some of the most commonly used options. Fuel produced from these sources, called biodiesel, offers better miles per gallon than regular gasoline, but fewer miles per gallon than the petroleum-based diesel fuels currently available. Pure biodiesel's fuel economy and power is about 10 percent lower than that of petroleum diesel. Biodiesel/petroleum blends are more efficient, but still about 2 percent less than the pure petroleum variety [source: U.S. Department of Energy]. The canola plant, which is part of the mustard family, produces seeds with high oil content -- about 40 percent -- and is a frequently used feedstock for fuel, particularly in the United States and Canada. Palm oil, which is produced in large quantities in Malaysia and Indonesia, may be a good choice from an economic perspective, but has raised concerns about its negative environmental effects. Biodiesel presents many of the same problems as ethanol, including displacement of food crops and increased greenhouse gas emissions as a result of transforming natural areas into biofuel croplands [source: The Nature Conservancy]. 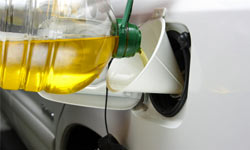 Recycled cooking oil is one waste product being used as fuel.
©iStockphoto.com/Khuong Hoang

It may not sound pleasant, but  waste products like used cooking oil and grease can be used as cheap feedstocks. They are attractive as fuel sources because they're both environmentally friendly and inexpensive. The issues regarding land use, energy consumption and environmental impact that often surround growing feedstocks like corn, sugarcane and palm trees, can be eliminated by using something that already exists and needs to be disposed of anyway. "Yellow grease," a term for recycled cooking oil that may include soy, palm or canola oil, is one type of waste product being used as fuel. Of course it's not possible to simply pour used restaurant grease into your car's gas tank; it must first be processed to remove impurities and turned into clean-burning fuel.

Much attention has been given to the seeds of a poisonous weedy shrub, jatropha, as a potential feedstock, particularly in India and Africa. Because it's not edible, jatropha used for fuel doesn't compete with its use as a food crop -- a frequently cited concern with many biofuel sources. The jatropha plant is hardy and drought-resistant, and it grows quickly. And it's of particular interest to scientists looking for inexpensive feedstock because the seeds can contain up to 40 percent oil. These qualities all sound promising, but so far jatropha crops don't seem to be providing high enough yields, most likely because it has been planted in "marginal" soil that isn't of high enough quality [source: Johnson]. Jatropha also requires a lot of water during the growing process. So, while the plant is inexpensive, it may not be ideal for large-scale production.