by John Perritano
Prev NEXT
9 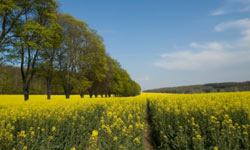 Yellow rapeseed is used to make biodiesel, and holds up in cold climates.
iStockphoto/Thinkstock

Generally, biodiesel made from vegetable oil does not perform well in cold climates. Why is that? Since most vegetable oil is high in saturated fat, ice crystals tend to form in the biodiesel causing a car's engine to seize. However, since canola oil is low in saturated fat, it is harder for ice to materialize in frigid temperatures [source: University of Connecticut].

Also, canola and other types of rapeseed have a higher oil content than other vegetable plants, which means canola and rapeseed can generate more energy when burned. Biodiesel made from rapeseed and canola oils releases less carbon monoxide than diesel fuel. Biodiesel made from rapeseed and canola is very efficient in powering heavy machinery and other vehicles. In general, engines that run on biodiesel are more efficient than gasoline-powered engines.