Browse the article Is there a future for steam-powered, super-efficient cars? 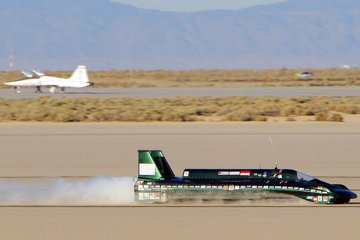 Can you imagine driving one of these? Check out these alternative fuel vehicle pictures to learn more!
Chris Ison - Pool/Getty Images

In the future, all of us will own flying cars. Oh, wait -- that's "The Jetsons." Our views of future transportation are a little more realistic, but cars will increasingly use electric power, reducing our dependence on fossil fuels. Right?

That outcome is by no means certain. In fact, there are some mechanically-inclined people who think that the way of the automotive future lies in another direction entirely: steam-powered engines. And though it might sound a bit antiquated, it's less dated than one might imagine.

Powering a vehicle with steam isn't so much an innovation as it is revisiting an old idea. Plans for steam-powered vehicles date as far back as the 17th century. Around 1672, a Flemish Jesuit named Ferdinand Verbiest drew up the specs for a very small steam-propelled vehicle (possibly a toy) while living at the Imperial Chinese court. There's little evidence to suggest that Verbiest ever built the vehicle, but a better-documented first attempt is that of Nicolas-Joseph Cugnot in 1769. His steam-powered carriage was slow and quickly ran out of steam (literally), but it still marked a breakthrough in transportation.

Innovations in steam power continued throughout the 19th century. By the time automobiles starting becoming commonplace on city streets, steam-powered cars were one of the options. The Stanley Motor Carriage Company produced steam vehicles that were affectionately known as Stanley Steamers or Flying Teapots. They were very popular in the early 1900s, but it soon became cheaper and more efficient to purchase what is now the norm for commercial automobiles -- a car with an internal combustion engine. This means that fuel is burned inside the engine, and the explosion from the burning gasoline results in the pressure necessary to turn the moving parts of the engine. In contrast, steam-powered engines work by external combustion, which means that a fuel source is required outside the engine to produce the steam that propels the moving parts. Thus far, internal combustion engines have proven themselves to be physically smaller and more fuel-efficient than their external cousins.

But that might be changing. A handful of mechanically-inclined tinkerers and entrepreneurs have set out to build more efficient steam engines. Some, like the British Steam Car Team, seem to be in it for the challenge and fun. Then there's Harry Schoell, whose company, Cyclone Power Technologies, has produced a steam-driven automotive engine that might actually convince consumers to give water vapor power a try. While the steam engines of the past have been large and unwieldy, Schoell's engines would fit easily into the footprint of a standard internal combustion engine.

So what's different? Schoell's design is built on a closed-loop system of heating and cooling, which makes the engine much more efficient and produces less waste than previous models. The steam gets so hot that it behaves more like a liquid, which yields more power. It's also less expensive to produce and maintain because it doesn't need a catalytic converter, muffler, oil or a transmission like an internal combustion engine. But best of all, in this era of fossil fuel anxiety, you can use any fuel you like to kick-start the steam process, whether that's gasoline from petroleum or biofuel.

But will steam-powered engines be used on large scale? Read on to learn more.

How will steam engines be used?

Steam-powered engines will have to overcome a lot of obstacles to win public approval, such as a common misconception that steam engines tend to explode (debunked by a number of sources, including the Web site Hybrid Cars). Others worry that it would take too long for the engine to build up the requisite amount of steam to drive from a cold start, but Cyclone reports a time of 10 to 15 seconds for start-up, and full power in less than a minute. That’s less time than a diesel engine requires to warm up.

Another point in favor of the steam-powered engine is its aforementioned fuel flexibility. When automobiles were first being manufactured, no one was thinking about running out of fossil fuels. These days, however, our dependence on fossil fuels is cause for concern among many, and any alternatives that allow us to lessen that dependence are starting to look very appealing.

Which leads to another question: how do steam-powered cars stack up against hybrids and electric vehicles? Hybrid and electric models certainly represent a step in the right direction toward resource conservation, but by no means will they free us from our independence on fossil fuels. Current hybrids use a combination of gas and electric power to run; these cars use less gasoline than standard internal combustion vehicles, but they still require it. They also produce fewer emissions, yet some remain. And electric cars, as pointed out here, often use electricity generated by coal or other fossil fuels, meaning that carbon emissions are still a part of the big picture.

In the case of the Cyclone steam engine, emissions are less of a concern (though by no means entirely gone). According to the company’s Web site, the engine burns longer than most and therefore incinerates more particles, which means less exhaust. And, that exhaust is dependent on the type of fuel used. If we can develop fuel sources that have increasingly less impact on the environment, the steam-powered engine’s carbon footprint would get even smaller.

Of course, all of this is entirely academic until car manufacturers actually decide to put steam engines in their vehicles and other machines, but it seems they’re starting to bite. Popular Science reports that Cyclone Power has reached an agreement to develop engines for lawn mowers and garden equipment, and in April 2011, according to Smart Planet, Cyclone made a deal with mega-firm Raytheon, a defense contractor with ties to the United States Military. Flexible fuel options could make a big difference for deployed troops that are away from any reliable supplies.

Only time will tell if the steam-powered engine actually makes an impact on the consumer automotive market. If it turns out to be the same price or less to manufacture on a large scale than traditional internal combustion engines, the steam-powered engine might be embraced by auto makers, and possible future oil crises could force us to seriously reduce our use of fossil fuels.

Today's steam engines are far superior to yesterday's models, so don’t count them out for widespread use tomorrow.

The Start of the Steam Locomotive

Steam-powered locomotive engines took off in a big way in the early 19th century. British engineer and inventor Richard Trevithick designed and built a number of prototype steam engines, including one that debuted in 1804 that could haul 10 tons of iron for 10 miles. Railways, and the trains that traveled them, proved to be an essential component of the Industrial Revolution, and steam locomotives maintained their technological superiority for transportation for more than a hundred years.