What is a solid oxide fuel cell? 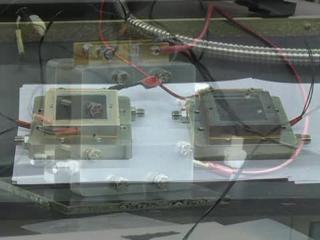 The first fuel cell was created in 1839, when Sir William Grove hypothesized that if an electric current could split water into oxygen and hydrogen, then reversing the procedure could create electricity and water. He was correct. Other scientists refined his experiments, creating what they called a fuel cell.

Today a wide range of fuel cells exists, each using a different chemistry to produce its energy. Fuel cells are categorized by the electrolyte they use and operating temperature they require. Because of the varying chemistries of fuel cells, some fuel cells are better suited to power smaller, mobile applications, while others do better powering stationary power plants.

The solid oxide fuel cell (SOFC) is a type of fuel cell that works best providing energy to stationary power plants. An SOFC operates at a very high temperature, around 1,290 – 1,830 degrees Fahrenheit (700-1,000 degrees Celsius). Conventional wisdom would lead you to think that operating at such a high temperature would indicate lower reliability, since the parts of the fuel cell would break down so often due to the heat. However, experience has found that the main wear and tear from such extreme heat happens when the fuel cells are turned on and off. If the SOFC is kept on for long periods of time, it in fact has been shown to have the longest operating life of any fuel cell under such conditions. Thus, the SOFC is particularly well suited for power plants that must constantly provide a continuous stream of energy to towns or factories.

Another advantage of the SOFC's high operating temperature is that it produces enough steam that it can also be used to power turbines, thus generating even more electricity than the fuel cell chemistry alone. When a fuel cell can produce both kinds of electricity, that process is called co-generation of heat and power (CHP), which improves the overall efficiency of the fuel system.