From Petroleum to Plowshares 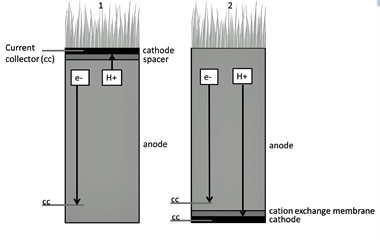 You're looking at two different designs for PMFCs, both of which were placed on a rooftop in Wageningen, the Netherlands.
Image courtesy Marjolein Helder/Plant-e

Like any new technology, PMFCs face a number of challenges; for instance, they need a substrate that simultaneously favors plant growth and energy transfer -- two goals that are sometimes at odds. Differences in pH between the two cell halves, for example, can bring about loss of electrical potential, as ions "short" across the membrane to achieve chemical balance [source: Helder et al.].

If engineers can work out the kinks, though, PMFCs could hold both vast and varied potential. It all comes down to how much energy they can produce. According to a 2008 estimate, that magic number comes in at around 21 gigajoules (5,800 kilowatt-hours) per hectare (2.5 acres) each year [source: Strik et al.]. More recent research has estimated that number could go as high 1,000 gigajoules per hectare [source: Strik et al.]. A few more facts for perspective [sources: BP; European Commission]:

By comparison, the 27 European Union countries in 2010 consumed 1,759 million tons of oil equivalent (TOE) in energy, or 74.2 billion gigajoules (20.5 trillion kilowatt-hours). TOE is a standardized unit of international comparison, equal to the energy contained in one ton of petroleum [sources: European Commission; Universcience].

In this simplified scenario, PMFCs provide a drop in a very large energy bucket, but it's a pollution-free drop, and a drop generated from lush landscapes instead of smoke-belching power plants or bird-smashing wind farms.

Moreover, it's just the beginning. Researchers are already working on more efficient waste-gobbling bacteria and, between 2008 and 2012, advances in substrate chemistry more than doubled electrical production in some PMFCs. PlantPower argues that, once perfected, PMFCs could provide as much as 20 percent of Europe's primary energy -- that is, energy derived from untransformed natural resources [source: Øvergaard; PlantPower].

PMFCs must become cheaper and more efficient before they can enjoy wide implementation, but progress is under way. Already, many MFCs save money by manufacturing electrodes from highly conductive carbon cloth rather than precious metals or expensive graphite felt [sources: Deng, Chen and Zhao; Tweed]. As of 2012, it cost $70 to operate a one-cubic-meter setup under laboratory conditions.

When one considers their potential for removing pollutants and for reducing greenhouse gases, who knows? PMFCs could garner enough investor and government interest to become the power plants of the future -- or plant the seed for an even better idea [source: Deng, Chen and Zhao].

If you think about it, building a battery that can run off of bacterial digestive processes brings us one step closer to cyborgs and self-powered machines. The human body relies on gut bacteria to convert food into energy; if we could tap into this process to juice fuel cells, then we might also power bodily implants, such as pacemakers.

Researchers at Harvard Medical School and Massachusetts Institute of Technology have already blurred this line, constructing a brain chip powered by glucose, which it harvests from recirculated cerebrospinal fluid [source: Rapoport, Kedzierski and Sarpeshkar]. Can cyberbrains be far behind? (Well, yes, probably).

Just imagine: We could build machines that graze! OK, that might not sound as sexy as ray guns and rocket ships, but such machines could remain active in the field indefinitely without need of a recharge or new batteries. A collection of MFCs could form a makeshift gut, pulling electricity from plant glucose.

Should someone pursue this idea, I hope they will employ PMFCs. I envision herds of white ceramic robots covered in Salvia hispanica, and I ask the question: