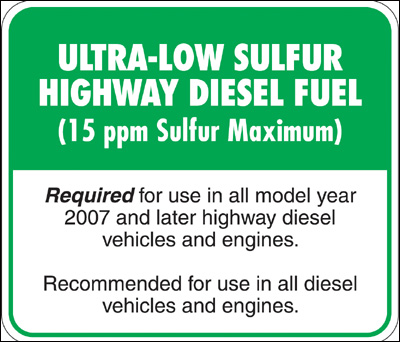 For many American consumers, the word "diesel" conjures images of smoke-belching semis and clattery, smelly passenger vehicles. Those negative perceptions are true to a degree: Despite their superior fuel efficiency, diesel engines have a few practical disadvantages. Recent engine technology advancements have made great strides in minimizing the noise and vibration traditionally associated with diesels, but one major demerit remains: subpar emissions quality.

The exhaust fumes from a typical diesel engine are much "dirtier" than a comparable gasoline engine's. Not only is diesel smoke unpleasant, studies have shown it to be unhealthy for humans and the environment. The government is currently taking steps to make diesel vehicles much cleaner: the U.S. Environmental Protection Agency has recently implemented new laws that mandate the use of a new, cleaner-burning type of diesel fuel named ultra-low sulphur diesel, or ULSD. The EPA's new standards will have significant effects on the petroleum industry, automakers, and consumers.

We'll explore just what ULSD is and the impact it will have on the industry and consumers in the following sections:

Environmental Protection Agency The particulate filter traps the particles of soot in the exhaust.

What is Ultra Low Sulphur Diesel (ULSD) fuel? In a nutshell, it's cleaner diesel. Ultra low sulphur diesel fuel has been refined so that its sulphur content is 15 parts per million (ppm) or less. This is 97 percent cleaner than the standard highway-use diesel fuel sold in the US, which contains an average of 500 ppm of sulphur. Sulphur, a natural part of the crude oil from which diesel fuel is derived, is one of the key causes of particulates or soot in diesel. Soot is the main culprit of diesel engines' noxious black exhaust fumes, and is among the prime contributors to air pollution. The move toward ULSD is aimed at lowering diesel engines' harmful exhaust emissions and improving air quality.

ULSD fuel has been the standard in Europe for several years. In the U.S., the changeover process began in June 2006, when the EPA enacted a mandate requiring 80 percent of the highway diesel fuel produced or imported to meet the 15 ppm standard. The new ULSD fuel went on sale at most stations nationwide in mid-October 2006. Both diesel fuels will be on sale for the next few years, with the goal being a gradual phaseout of 500 ppm diesel. By December 2010, all highway-use diesel fuel offered for sale in the U.S. must be ULSD fuel. (ULSD is not to be confused with biodiesel, which is diesel derived from biological ingredients such as plant oil or animal fat and usually blended with standard diesel fuel.)

ULSD fuel will work in concert with a new generation of diesel engines that will begin arriving for the 2007 model year. Ideally, ULSD will enable the new generation of diesel vehicles to meet the same strict emission standards as gasoline-powered vehicles. The new engines will utilize an emissions-reducing device called a particulate filter. The process is similar to a self-cleaning oven's cycle: a filter traps the tiny particles of soot in the exhaust fumes. The filter uses a sensor that measures back pressure, or the force required to push the exhaust gases out of the engine and through to the tailpipes.

As the soot particles in the particulate filter accumulate, the back pressure in the exhaust system increases. When the pressure builds to a certain point, the sensor tells the engine management computer to inject more fuel into the engine. This causes heat to build up in the front of the filter, which burns up the accumulated soot particles. The entire cycle occurs within a few minutes and is undetectable by the vehicle's driver.

With appropriate vehicle maintenance, ULSD fuel is expected to be fully compatible with 2006 and earlier diesel engines and perform as well as previous diesel fuels in normal operating conditions. Diesel engines manufactured for the 2007 model year and later will utilize some type of particulate filter and will be designed to run solely on ULSD fuel. The use of non-ULSD fuel in these engines is illegal, as the higher sulphur content will prevent the particulate filter and other emissions controls from working properly. And, since non-ULSD fuel will damage the engine over time, its use will likely void the vehicle's warranty.

In the next section, we'll explore the recent changes in the diesel marketplace, and how auto manufacturers are adapting. 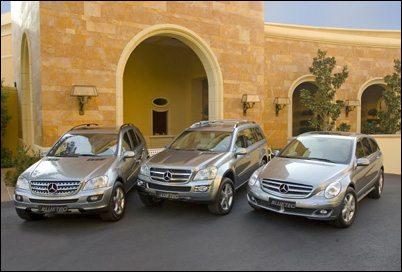 Mercedes-Benz' Bluetec diesel technology is available in the GL320, ML320, and R320 [from left to right].

Concerns about the world's oil supply and ever-rising fuel prices have brought a renewed focus on diesel's superior fuel economy. Because of their unique engine design, diesel engines are typically 20 percent to 40 percent more fuel-efficient than comparable gasoline engines. A 2004 EPA study concluded that if just one-third of light-duty trucks in the U.S. were operated with state-of-the-art diesel engines, the country would save 1.4 million barrels a day -- equal to the amount the USA currently imports from Saudi Arabia. A recent J.D. Power study predicts that diesel sales will trend upward, comprising 11.8 percent of the market in 2015 as opposed to the 3.6 percent they comprise today.

For the 2008 model year, Mercedes plans to equip its diesel engines with a urea-injection system, which it has dubbed AdBlue. The system adds measured quantities of a urea-based solution into the exhaust stream to help reduce nitrogen oxide emissions. The AdBlue system should enable Mercedes' future diesels to reach BIN 5 emissions requirements for 50-state legality.

More new products are on the horizon. Honda has announced a next-generation diesel engine that it plans to release in the U.S. by 2009. The Honda engine will utilize a dual-stage catalytic converter that converts nitrogen oxide exhaust emissions into ammonia and then into harmless nitrogen gas. Honda claims the new engine will meet BIN 5 requirements and achieve emissions as clean as a gasoline engine's. General Motors and Volkswagen, among other manufacturers, are expected to launch new diesel-powered models within the same 2009 timeframe. Some industry analysts have likened the current ULSD changeover to the mid-1970s changeover from leaded to unleaded gasoline, which was implemented in part to enable the use of emissions-reducing catalytic converters. Proponents of ULSD are hopeful that the switch to clean diesel will have a similar positive impact on the environment.

Like previous diesel passenger vehicles, the new generation of ULSD-fueled vehicles will cost more than their non-diesel counterparts. However, the sticker-price hike should be less than the current premium for gas/electric hybrid technology. Mercedes-Benz's 2007 Bluetec diesel models start at $1000 more than their gasoline siblings. Most 2007 hybrid vehicles demand a premium of $2500-$3700 over the comparable non-hybrid versions.

In the arena of fuel economy, let's look at how the Mercedes diesels stack up against a pair of comparable luxury gas/electric hybrid vehicles. The Mercedes-Benz E320 Bluetec sedan is EPA rated at 26 mpg city/37 mpg highway. The 2007 Lexus GS 450h sedan, while it provides slightly better acceleration, is rated at 25/28 mpg. The Mercedes-Benz ML320 CDI sport-utility vehicle is rated at 21/27 mpg. The 2007 Lexus RX 400h hybrid SUV is rated at 31/27 mpg -- more efficient in city driving, but the same on the highway.

Judging from these early examples, it appears that the next generation of diesel vehicles will be viable competitors in the automotive marketplace. There are still challenges to overcome, but the potential benefits are clear: ULSD and the new emissions-reducing technology that it facilitates will help make the air cleaner and healthier for everyone.