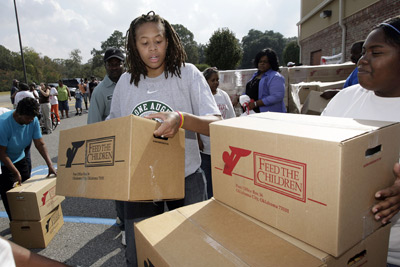 Skeptics of biofuel are concerned that funding for food aid programs, like Feed the Children (above), will dry up if excess food is used as fuel.
Layne Murdoch/NBAE via Getty Images

Competition is tight between corn and switchgrass over which will serve as the feedstock for future ethanol production. Because some areas that grow corn can't grow switchgrass, and vice versa, many regions have a vested interest in the outcome of the alternative fuel debate. Based on research into production costs, energy ratios and GHG emissions, it appears corn-based ethanol simply can't compete with ethanol made from switchgrass.

But while ethanol made from the two crops is similar in many respects, the process by which switchgrass is turned into fuel makes it the superior choice for many researchers, politicians and activists. Corn ethanol production, for example, uses only the grain (the stuff you eat) to produce ethanol. The rest is cast off -- although, ironically, the crop residue can be used in cellulosic ethanol production.

Another advantage switchgrass has over corn is the amount and type of land it requires. In Iowa -- a state with better-than-average soil -- the average crop yield was roughly 4.8 tons per acre in 2005. The 2005 North Dakota study, mentioned before, showed a yield of around seven tons of switchgrass per acre. And switchgrass doesn't require the best soil to grow well. It can be grown on land not currently used for crops.

A report produced by Oak Ridge National Laboratory concluded that fueling half of the vehicles on the road in the United States today with ethanol would require 180 million acres of land to grow switchgrass. This accounts for 40 percent of the land already in use for agriculture in America [source: U.S. Senate].

But the NCEP's Jason Grumet believes that with "steady but unremarkable progress" in research and development, we could get the amount of land needed to produce that much ethanol down to 30 million acres in 20 to 30 years. Grumet mentions that that's about the amount of acreage in the Conservation Reserve Program (CRP), a federal program that pays farmers to set aside land as fallow to reduce the environmental impact of agriculture [source: U.S. Senate].

Grumet isn't the only person to imply that switchgrass could be grown in marginal land. After all, it's been shown to improve the soil where it's planted, and CRP land could benefit at the same time feedstock is being grown for ethanol production. But not everyone believes that industrial switchgrass production is the best use for CRP land. Skeptics argue that most land enrolled in the Conservation Reserve Program is set aside because the soil won't produce high-quality crops. If switchgrass becomes the next fuel source, and major companies pump large amounts of money into its production, these critics arg­ue that these same companies will want the highest yield possible. This would be best realized by using the best land available. Which means that some arable land would go from food production to energy production.

We use a small portion of food crops for fuel today. If we come to rely on biofuels as our energy source, energy and food may come into direct competition for resources, specifically land.

This concerns some, including Dr. Eric Holt-Gimenez, of the Institute for Food and Development Policy. When fuel prices rise, so too do food prices, due to the increased cost in production and transportation. Holt-Gimenez argues that if food and energy compete for land, food prices may have a reciprocal effect on energy prices. What's more, he says that food surplus programs for hungry countries may dry up since surplus food could be used as biomass for ethanol [source:Holt-Gimenez].

There are other concerns about cellulosic ethanol, as well. Some believe the claims of its potential are too rosy, based on studies which demonstrate that cellulosic ethanol doesn't have the energy ratio other studies purport. But these studies are fewer in number -- and receive far less attention -- than those which demonstrate switchgrass' potential. And if funding and public opinion are indicators for progress, it looks like switchgrass ethanol is a go.

For lots more information on biofuels, energy and related topics, read the next page.