Problems and Solutions of Switchgrass 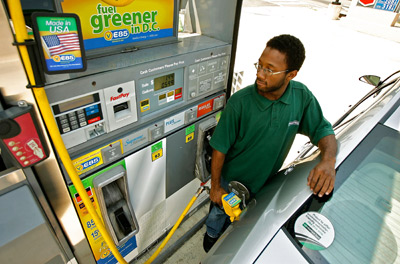 E85 ethanol is appearing at more gas stations, like this one in Washington. D.C. The fuel may be sold for as little as $1 per gallon if researchers can streamline the production process.
Chip Somodevilla/Getty Images

While it's becoming clearer with the publication of each new study of switchgrass that the plant may play an important role in future energy relief, the word "future" is key. Presently, the process of extracting cellulose from the plant is proving difficult and expensive.

Cellulose derived from plant material is produced by any of a variety of enzymes, depending on the kind of plant material being used. These catalysts dine on complex carbohydrates, like sugars, and expel cellulose and carbon dioxide as waste in the process. These enzymes are expensive, however, around 20 cents for every gallon of purified ethanol [source: Federal Trade Commission]. What's more, the fermentation process of cellulose with yeast requires a different enzyme, further raising costs. In 2006, plant geneticist Albert Kausch said that with current cultivation and production methods, the cost per gallon of cellulosic ethanol would be $2.70. That's still cheaper than gas­oline, but Kausch believes it could be brought down to around $1 per gallon [source: Newswise]. One of the ways to achieve this dramatic cost reduction is to develop cheaper enzymes and find a single enzyme that can both break down cellulose and ferment ethanol.

One of the other problems facing ethanol is getting it from refineries to fuel stations. Ethanol is highly corrosive and can't be shipped via pipelines as oil and petroleum can. This means that it must be transported by trucks, which both adds to the costs of production and lowers the energy ratio, since big tanker trucks require more fossil fuels to transport the ethanol for distribution.

Argonne National Laboratory's Michael Wang tells HowStuffWorks that the challenge of distributing ethanol could, in part, be overcome by using rail systems to carry it as far as possible. "When you refine it in the Midwest and transport it to the West, transportation is a problem," he says. "You would have to use rail. But when transporting it short distances, it doesn't make much difference [to the net energy ratio]."

The other problem switchgrass ethanol currently faces is the amount of land available for its cultivation. A University of Tennessee analysis concluded that the United States could produce a total of 153 million dry tons of switchgrass and crop residue -- the stuff that's left over after agricultural harvesting and production, like stems and seeds -- annually as ethanol feedstock. Its figures show that this would result in a 5.3 percent reduction in annual gasoline consumption in the United States -- far less than expected, and much less than the 35 billion gallons of renewable fuel President George W. Bush called for by 2017 in his 2006 State of the Union address.

Like enzyme research, technology could also overcome this hurdle. Jason Grumet of the National Commission on Energy Policy (NCEP) suggests developing strains of switchgrass that could increase ton-per-acre yields, increasing the efficiency in ethanol production by one-third and doubling the fuel efficiency of all vehicles in America [source: U.S. Senate].

The money is definitely there to overcome these hurdles. Both energy companies and crop research conglomerates are pouring money into cellulosic ethanol facilities. BP Amoco PLC gave the University of California - Berkley and the University of Illinois - Champaign a combined $500 million to fund a research facility. Chevron Corporation gave the University of California - Davis $25 million and the Georgia Institute of Technology $12 million. And the Oak Ridge National Laboratory received $125 million from the U.S. Department of Energy for cellulosic ethanol research [source: DeMonte]. Still, many companies are looking to the United States government to help foster research and development by providing investment guarantees and tax breaks for financiers who bet on cellulosic technology.

­ With the amount of money pouring into cellulosic ethanol research and the possibility that more is on the way -- not to mention the enthusiasm and public support -- it's hard not to imagine that within just a few decades, switchgrass-based ethanol will be filling our cars. But switchgrass also has its skeptics. Some don't think the grass lives up to expectations, and others fear the consequences if it does. Read about biofuel skeptics on the next page.