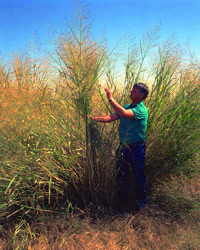 Research into sources for biological fuels -- biofuels -- has included everything from chicken fat to wood chips. But processing most of them yields a low net energy ratio -- the amount of energy each unit puts out isn't much more than the energy put into its production. Cost has also been a problem: Techniques for extracting fuels from plant and animal resources are currently expensive, which would be reflected at the fuel pump. But the more researchers crunch the numbers on switchgrass, the more it looks like a good candidate for an alternative fuel source.

Switchgrass is a n­ative perennial species to the Americas. It grows quickly and easily on plains. It's a tough, hardy species -- in some cases, it's considered invasive. A three-year study in North Dakota published in 2005 showed that, when left alone, some varieties of the grass can produce an average yield of more than seven tons of biomass -- the harvested plant material -- per acre, depending on precipitation and soil type [source: U.S. Department of Agriculture].

­The grass is also resistant to drought and requires little, if any, fertilizer. This means that it requires less fossil fuel expended on production. Tractors used to spread fertilizer and fuel the pumps that irrigate fields require fossil fuel. Less irrigation and less fertilizer, then, means reduced energy input, which in turn means less cost and fewer greenhouse gas emissions. What's more, switchgrass proponents say that fuel produced from the plant would make the United States more secure and independent, since it could be grown in America rather than imported from other nations.

The fuel produced from switchgrass feedstock -- the raw material used to produce a distilled fuel -- is cellulosic ethanol. This alcoholic fuel is created by a chemical process of breaking down the cellulose -- the structure that makes up the cell walls in the plant. Once the cellulose is broken down into its basic components, yeast is added, and it's fermented into alcohol. After it's refined, the ethanol produced can be used as fuel.

The more cellulose available for extraction from a plant the more valuable it becomes as a source of ethanol. And switchgrass has lots of cellulose. Around 70 percent of the plant is composed of these complex carbohydrates [source: BioCycle]. Even better, lignin -- a byproduct created when water is eliminated from cellulose -- has shown promise for use as a fuel to power ethanol production plants. If lignin can be harnessed, this could make ethanol processing self-sustaining.

Beginning with the production of fertilizer used to grow the grass and ending with transportation for distributing ethanol, Argonne National Laboratory researcher Michael Wang calculated the energy ratio for switchgrass. He found that every one unit of energy put into cellulosic ethanol production from switchgrass created 10 times the energy output. This is much higher than ethanol derived from corn. By contrast, gasoline has an energy ratio of 1 to 0.81, which means it requires more energy to produce than it yields. Wang also found that switchgrass ethanol may require 70 percent less fossil fuel to produce than gasoline and E85 ethanol -- a mixture of 85 percent ethanol and 15 percent gasoline -- emits 86 percent fewer GHGs than gasoline does. [source: Wang].