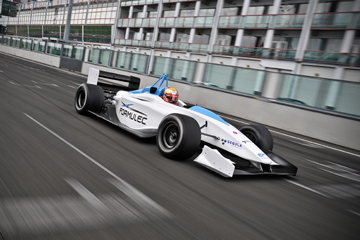 Most people have heard of Formula One racing, with its pointy-nosed, open-wheeled race cars. There's also a Formula Two and Formula Three series with similar cars but different rules and regulations. And now, there's Formula E -- with the same pointy nose, the same open-wheel design and a completely different power source.

The "E" is obviously for "electric," and these all-electric cars will be tearing up the street tracks beginning in 2014. According to Formula E, however, the "E" also stands for "exciting, efficiency, environment, and last but not least, a new era." It can also, they say, stand for "entertainment." I think we, the fans, will be the judge of that, thank you very much.

What we do know is that it's is run by Formula E Holdings (FEH), and that they've got some pretty compelling reasons for firing up an all-electric race series. FEH feels strongly that automotive emissions are contributing to global climate change, and they want to showcase a zero-emissions race field and at the same time drive home the point that electric cars are fast, reliable and safe.

FEH isn't the first outfit to come up with this idea. The National Electric Drag Racing Association (NEDRA) has been silently beating gassers on the drag strip since 1997, and the TTXGP electric motorcycle race ran its inaugural event on the Isle of Man in 2009.

This is, however, the first series to attempt to cash in on the international cache of Formula racing. So let's poke around under the hood a bit to see what this series runs on. 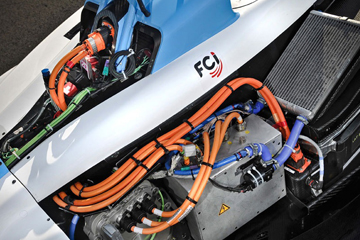 Formula E cars will be powered entirely by electricity stored in lithium ion batteries. No hybrids, no flywheels or kinetic energy recovery system (KERS) either.
Courtesy of Formula E

We need to start with just a teensy bit of history to bring everyone up to speed: In 2008, French designer Frederic Vasseur and his company Formulec unveiled the first electric Formula-style race car. Formula E Holdings then bought the technology from Formulec, and Vasseur founded Spark Racing Technology (SRT), a consortium charged with designing the race cars for the series.

The group includes none other than the legendary racecar builders from McLaren. You may know them for their Formula One Vodafone McLaren Mercedes, or you may know the names of some of the many drivers to grace McLaren race seats over the years, like Jensen Button, Lewis Hamilton, Juan Pablo Montoya or even racing legend Ayrton Senna.

FEH is hoping the partnership will work the same magic for electric Formula cars -- which, by the way, will be powered entirely by electricity stored in lithium ion batteries. No hybrids here, no flywheels or kinetic energy recovery system (KERS) either. Here's a breakdown of the stats:

The 90-minute charge required for 25 minutes of all-out racing might be a hard sell, but all the other numbers seem quick. And don't forget that electric cars have all their torque available immediately, as soon as the driver hits the accelerator, making race starts super-fast.

FEH has already purchased 42 of these SRT cars to make sure that there's a field of race cars (one worth watching) when the switch is flipped on the series in 2014. That's 4 cars for each of the 10 teams, plus 1 car to do the FIA-required crash tests and 1 car for developmental testing. Should any of the teams get a Formula E car of their own ready by race day, the extra SRT cars will be used as series promotional cars. 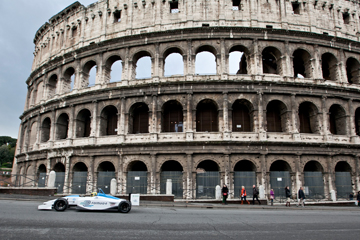 Just as there are 10 teams for the 2014 season, there will also be 10 host cities.
Courtesy of Formula E

As of early 2013, two teams have already stepped up and signed on the dotted line, committing to the inaugural season of the E-Prix, as some are already calling it. (You know, because "E" and "Prix" rhyme in that catchy little phrase.)

The first to sign up was Drayson Racing Technologies. They've already announced they'll be using the SRT cars provided by FEH for the 2014 season; however, they're developing their own race car for the 2015 season in conjunction with another racing powerhouse, Lola. In fact, a prototype of their joint effort has already set an electric record at the 2012 Goodwood Festival of Speed in the United Kingdom.

The second team on the schedule is Team China Racing, which has competition experience in Superleague Formula and FIA GT1. They also plan to take advantage of Formula E Holdings' offer of team cars from SRT for 2014, and like Drayson Racing, Team China is developing its own car for 2015.

The teams will race on city streets rather than on designated tracks, much like classic and longstanding Formula One races. Just as there are 10 teams for the first season, there will also be 10 host cities. The first eight (with two more to be announced) are:

The teams will use Fédération Internationale de l'Automobile (FIA) tech regulations, just like nearly every race with a stop in Europe on its calendar. Teams are encouraged to do as Drayson and China Racing are doing and come up with their own cars for future races, as Formula E is designated as an open championship. Anyone with a car that meets regulations can pay to play -- and possibly win.

I've been to lots of electric-powered races, oddly enough. I've been to drag races and time trials. I've seen professionally built team cars and home-built conversions take to the track, too. I've seen record-setting motorcycles and puttering electrical embarrassments, and they're all (every one of them) silent but for the sound of tires on the pavement. Sometimes there's a whirr -- if you're lucky.

So a whole field of 10 Formula E cars circling the track at the same time is going to require some adjustment on the part of the spectators. I guess we're all going to have to do our part to make some noise, because the race cars just ain't gonna do it for us this time. Maybe they could play a Formula One engine soundtrack over the PA?