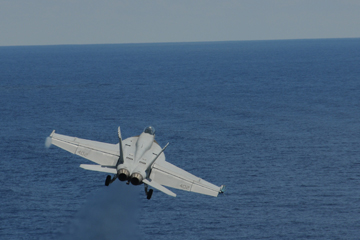 They sure can -- well, at least they say they can. Someday. The U.S. Navy might not be able to create fuel from seawater right now, but they allege it's possible. Why not just turn water into wine, then, if it's so easy to convert the brackish, salty, polluted ocean into something more valuable? Well, let's go back about 10 years to follow the logical progression of the saltwater-to-fuel theory.

In 2003, an inventor named John Kanzius was working on a method of using radio waves to target and destroy cancer cells without affecting nearby healthy skin. A few years later, he discovered that his machine could generate electricity by using the radio waves to zap salt water -- after hitting the water with a concentrated radio wave blast, the water became flammable, igniting off a lit match. The water lost its flammability, however, as soon as the radio waves were stopped.

Kanzius' machine achieves this effect by shaking up the composition of the salt water. Salt water (as if you couldn't have figured this out already) is made from two ingredients: salt (sodium chloride) and water (hydrogen and oxygen). When the radio waves penetrate the water, the hydrogen molecules are shaken loose and their normal properties of flammability become easier to access.

One of the tricks to harnessing energy in general -- not just igniting salt water -- is to make sure the process can capture more energy than it takes to operate all the required machinery to extract the energy. Otherwise, the energy generation will be operating at a net loss and there's no point in doing that since the process won't be sustainable. It's actually a little more complicated equation than simply measuring energy expended vs. energy generated. There's also the environmental aspect -- how much pollution occurred to create and operate the machinery, and is the newly captured energy clean enough to be worth it? Are the resources gone for good, or are they renewable? And what about the ongoing costs of operation -- the maintenance? The human labor required? So far, Kanzius' radio wave apparatus can't meet those necessary thresholds. It was (and still is) a noteworthy achievement, but other innovators have made progress over the past 10 years, too.

In February 2012, a Japanese firm called Furukawa Battery announced that it was working on a fuel cell using similar technology. The company expects the fuel cells, when ready for prime time, will cost about half as much as a comparable, conventional battery [source: Pentland]. Furukawa Battery envisions its technology being used as a source of backup power in homes, with eventual expansion into healthcare and technology applications. But still, that's a bit far removed from fueling up large military vehicles.

Along came the U.S. Navy, with its massive fleet and insatiable appetite for expensive fuel. In late 2012, the U.S. Navy acknowledged it would take about a decade before their ocean water to fuel plan was plausible ... but, it's in the works. After all, they're talking about turning ocean water (which is a cocktail made of salt water and lots of other stuff) into actual fuel, which is a significant deviation from the previously-mentioned plans of filling batteries with a presumably much cleaner salt water mixture. And not just any fuel, but JP-5 jet fuel, which is what the U.S. Navy prefers to use for its considerable fleet of airborne vehicles.

And this fuel could be theoretically converted on-the-go, considerably simplifying the logistics of refueling en route (although the Navy has yet to solidify the logistics of fitting the processing machinery onto an aircraft carrier) [source: Stewart].

The following process could make about 100,000 gallons (378,541 liters) of JP-5 per day. It could also work to produce synthetic versions of other hydrocarbon-based fuels, which could eventually make the process more versatile. First, a processing plant would pull the carbon dioxide out of water (of vague freshness and origin). This carbon dioxide would be stored in an unspecified way, like a recipe instructing a cook that an ingredient should be set aside. Then, ocean water is subjected to a reverse osmosis procedure that produces fresh water -- theoretically, this is all happening at sea and that's why the process can't simply start with fresh water. The second process separates out all the fresh water's atoms -- two hydrogen atoms for me; one oxygen atom for you. Then, the hydrogen meets with the carbon dioxide from the first step and it all goes through a catalytic conversion procedure that results in water, heat and fuel. The water and heat can be used to help power the process itself or used elsewhere on the ship -- the process does require some kind of outside energy source to keep all the machinery going (although the Navy Times suggests that ocean thermal energy conversion or nuclear power (which is already commonplace on military vessels) are the likely contenders to juice such a system).

So, there's water and heat. Easy enough to recycle somehow. And fuel. The fuel is, of course, the ultimate objective. So, all that just to be burned. But at least it wasn't used as a pawn in some kind of international political power play. In 2011, the Navy spent between $3.50 and $4 a gallon (3.8 liters), on average, for JP-5. The new JP-5 is estimated to cost between $3 and $6 a gallon (3.8 liters), which will decrease over time as cost savings from fuel, storage and transport help pay off the initial investment.

These are the answers I couldn't find. No one -- at least no one that I could find -- is talking about other environmental implications of these synthetic hydrocarbon fuels. Fueling a ship or a jet is never going to be clean. Or easy, for that matter. But it'll always be worthwhile to improve a process (especially a new process) as much as possible.

So of these synthetic hydrocarbon-based fuels, it seems reasonable to assume that as they're burned, they'll pollute on par with their naturally-derived counterparts. I'm basing that theory mostly on the fact that they're still called "hydrocarbons" and not something like "hydrogen" or "water." The word "carbon" will probably always have a negative connotation, conjuring-up mental images of soot. (With the exception of my ninth-grade science teacher, who was a pyromaniac and was constantly setting flame to sheets of carbon paper, folded to stand upright. They would lift into the air as the paper was close to burning out.) So, yes, there will probably be sooty smoke and exhaust emitting from these engines and exhaust ports.

And what happens to the ocean water that's purified during the production process? Are the contaminants stripped out and put back into the ocean, trailing the ship as it chugs along? Or is the purified part the byproduct, and the ocean's stew becomes part of the final product? These are the questions I know I should answer, but that I only wish I could answer. If I can get someone else thinking about them, though, I'll have to be happy with that.