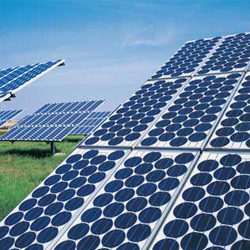 Solar power is a good alternative energy source, but current solar panels are expensive and only cover a limited surface area. Imagine if every surface of a steel building could capture solar energy?
Hans-Peter Merten/Getty Images

If someone suggested you could power all the electric devices in your home with paint, and then you compared the price per-gallon of paint to fuel, you might think this idea is short-lived. But this isn't paint you burn as fuel -- it's a special solar paint that captures the energy of the sun.

Swansea University engineers are working on what is essentially a paint-on solar panel that can be applied to the steel panels used to cover many buildings. The interaction of the sun with the paint and the underlying steel surface creates a current that can be captured and diverted.

Taking into account the huge amount of square-footage available, and using a relatively modest 5 percent conversion rate for available solar energy, the scientists calculate that annually the solar paint could produce the energy of 50 wind farms in Britain alone. And that's even considering the level of sunlight Britain receives -- not much compared to places like Arizona or Kenya [source: Science Daily].