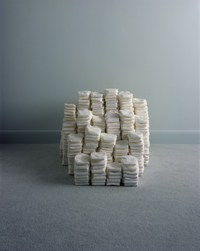 Instead of a smelly pile of trash that will take more than 100 years to biodegrade, dirty diapers could be used to fuel a power plant.
Eg Project/Getty Images

This one sounds almost as gross as dead cats, but used diapers could be an excellent fuel source -- not that anyone would want to live downwind of the power plant. It's possible for garbage to be turned into fuel gas and fuel oil with very little pollution by using a process called pyrolysis. It differs from incineration in that the material is heated in a sealed, oxygen-free environment, which breaks down the molecules inside to create useful byproducts.

Why do diapers make such good candidates for pyrolysis? There are several reasons. For one, we have a lot of disposable diapers, and we (as in, babies) constantly generate more. The second reason is that it would be relatively easy to use special recycling bins to separate them from other garbage.

The third and final reason is -- and really, this is the biggest reason it would work -- consistency. Pyrolysis works best when it has been fine-tuned to the material being heated. Mixed garbage is full of all kinds of random materials, and you never know what sort of mix you're going to get from one day to the next. We know exactly what's in diapers, that is, in terms of the plastics and fabrics used in their manufacture, as well as what's in diapers, in terms of what babies put there.

So what's the end result of taking in dirty diapers for finely tuned pyrolysis? Fuel products, of course. A power company in Quebec, Canada is planning a plant to test the technology [source: Hamilton].