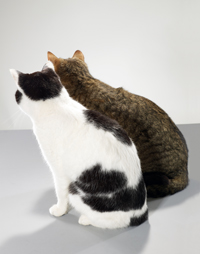 No cats were harmed during the writing of this article.
Michael Blann/Getty Images

Could you use cat corpses to fuel your vehicle? If you could, would you want to? A German newspaper reported in 2005 that an inventor had developed a fuel system that could be powered by garbage, including deceased felines.

The story, soon picked up by Internet news sites, included the gruesome fact that a full tank of fuel would require 20 cats. The article even offered some comments from at least one outraged animal rights supporter.

Like many bizarre stories, this one had a grain of truth. Dr. Christian Koch did indeed invent a machine that can convert garbage such as paper, plastics and yard waste into biodiesel fuel. There was no mention of cats, however. The whole dead-cat angle was apparently invented by a ghoulish, but creative reporter. Koch's KDV 500 device can supposedly turn trash into gas at a steep discount compared to prices at the pump [source: Deutsche Welle].

Up next, an idea for an alternative fuel that some people may find difficult to part with -- especially on a hot summer day.