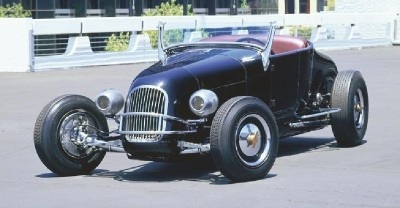 The Frank Mack T was a beauty. Dubbed the "ImMACKulate T," the 1927 Model T roadster won Best in Show at the first Detroit Autorama in 1953. See more hot rod pictures.

When Tom Medley (aka Hot Rod magazine's Stroker McGurk) saw the Frank Mack T at the first Detroit Autorama in 1953, he was impressed. The show judges agreed, awarding the 1927 Model T roadster Best in Show.

Tom wrote a feature on the car for the November 1953 Hot Rod, dubbing it the "ImMACKulate T." Immaculate it was, as Mack spent more than 3,000 hours over three years building the roadster, doing everything but the upholstery himself.

Mack, a Farmington, Michigan, native, pieced the tracknose together from two 1941 Chevy fenders. He fabricated a full bellypan, but left the transmission and driveshaft exposed between the driver and passenger seats.

E&J accessory headlights give the car a look that is distinct from other rods of its era. Hand-fabricated, chrome-plated, 3/4-inch nerf bars and early Dayton wheels complete the package.

The suspension consists of a 1938 Ford tube axle and spring setup hooked to a reworked 1937 Ford crossmember. In the rear, the stock crossmember bolts to a 1934 Ford rear end with 4:11 gears.

The Mercury flathead engine is basically stock, except for a pair of Edelbrock heads that boost compression to 8.5 to 1.

The Frank Mack T has an exposed transmission and driveshaft between the driver and passenger seats.

Mack reluctantly sold the car to collector Bruce Meyer in 1997. Never restored, it is a testament to Mack's skills as a builder and his dedication to automotive maintenance.

Preserved in remarkable condition, this unique roadster is an important living example of the history of hot rodding. Fittingly, Meyer showed it at the 50th Detroit Autorama -- the place where ol' Stroker first saw it all those years ago.