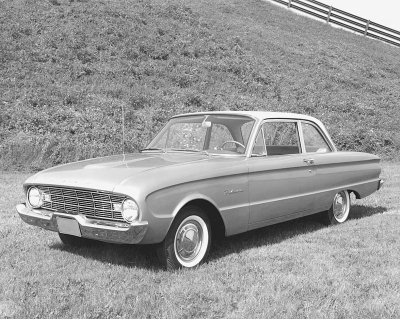 Ford also moved from "Chevy-follower" to "Chevy-leader" in the 1960s. Its compact Falcon far outsold the rival Corvair, its 1962 midsize Fairlane was two years ahead of Chevelle, and its phenomenally successful Mustang sent Chevrolet racing to the drawing board to come up with the Camaro.

The best way to summarize Fords of the '60s is by size. The smallest was Falcon, which bowed for 1960 as one of the new Big Three compacts (along with Corvair and Chrysler's Valiant). Wheelbase was a trim 109.5 inches through 1965, then 110.9 (113 for wagons). Two- and four-door sedans and four-door wagons were always offered, convertibles and hardtop coupes for 1963-65. All had unit construction.

To some, the pre-'66 Falcons were the ultimate "throwaway" cars: designed to sell at a low price -- initially just under $2000 -- and to be discarded within five years (some said one year). To others, though, Falcon was the Model A reborn: cheap but cheerful, simple but not unacceptably spartan.

A conventional suspension and cast-iron six -- mostly a 170-cid unit of 101 horsepower -- certainly looked dull next to Corvair engineering, but made for friendly, roomy little cars that rode well and delivered 20-25 mpg. Falcons were also easily serviced by "shadetree mechanics" who wouldn't go near the complicated Chevy compact. Though sales gradually declined due to competition from both inside and outside the division, Falcon was always profitable.

Falcon replied to the hot-selling Corvair Monza in the spring of 1961 with the bucket-seat Futura two-door. All Falcons were reskinned for 1964-65 with pointy front fenders and generally square, less-distinctive lines. The prime collector Falcon is the Futura Sprint, a pretty convertible and hardtop coupe offered from mid-1963 through 1965.

These were available with the lively "Challenger" small-block V-8 from the midsize Fairlane -- initially a 260 with 164 horsepower, then a 289 with about 200 horsepower for '65. It was a fine engine, which helps explain why its 302 evolution continued all the way into the 1990s. It completely transformed Falcon performance without greatly affecting mileage. Sprints offered special exterior I.D., vinyl bucket seats, console, and 6000-rpm tachometer. When equipped with optional four-speed manual transmission, they were great fun to drive.

The 1966 Falcons were basically shorter versions of that year's rebodied Fairlanes, with the same sort of curvy GM-like contours and long-hood/short-deck proportions of Mustang. Falcon continued in this form through early 1970. In 1967, its last year before emissions controls, the 289 packed 225 horsepower in "Stage 2" tune with four-barrel carburetor, and made for some very fast Falcons, the sportiest of which was the ­pillared Futura Sport Coupe.

The 289 was detuned to 195 horsepower for '68, when the aforementioned 302 arrived as a new option. This ran on regular gas with a two-barrel carb and delivered 210 bhp; with a four-barrel it made 230 horsepower on premium fuel, though emissions considerations soon put an end to that version.

Mid-1970 brought the final Falcons: a stark wagon and two sedans derived from the intermediate Torino (which had evolved from the Fairlane). These could be powered by everything from a 155-bhp 250-cid six to a big-block 429-cid V-8 with 360-370 horsepower. But the name had outlived its usefulness, and Ford had a new compact, the Maverick, so Falcon was consigned to history.