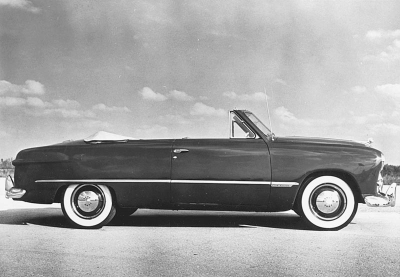 Styling for these 1949 models was a competitive process, as Ford solicited ideas from freelancers as well as in-house designers. One outside team was headed by George Walker, who hired onetime GM and Raymond Loewy employee Richard Caleal to join designers Joe Oros and Elwood Engel.

When Caleal became disenchanted with the direction taken by the other members of the Walker team, he was given permission to pursue his own ideas at his home in Indiana. Working in his kitchen with clay modelers Joe Thompson and John Lutz, Caleal shaped his design.

Later, Henry Ford II and other Ford execs gathered at Walker's studio to view design proposals by Caleal, Ford styling head E.T. "Bob" Gregorie, and Oros and Engel. The executives selected Caleal's design, which went into production basically unchanged, except that his vertical taillights were made horizontal and bled into the rear quarter.

Though the 1949 Ford was nowhere near as radical as the 1950-51 Studebaker, it sold in numbers Ford hadn't seen since 1930: over 1.1 million for the extra-long model year. Reflecting this and later achievements, Walker was named design chief for all of Ford Motor Company in 1955.

The 1949 Ford was crucial to Dearborn's survival. Young Henry II was still scrambling to bring order to the organizational and fiscal chaos he inherited from his grandfather even as the company continued losing money by the bucketful. But the '49 was the most-changed Ford since the Model A, and was as much a hit.

Though wheelbase and engines were unchanged from the 1946-48 models, the '49 was three inches lower, fractionally shorter, and usefully lighter. Even better, it had a modern ladder-type frame with Dearborn's first fully independent front suspension (via coil springs and upper and lower A-arms), plus a modern rear end with open Hotchkiss drive (replacing torque-tube) and parallel longitudinal leaf springs supporting the live axle. It all added up to a sprightly performer that could run ­circles around rivals from Chevrolet and Plymouth. A '49 Ford couldn't quite reach 100 mph, but hopping up the flathead V-8 was still simple, cheap, and easy. Multiple carburetors, headers, dual exhausts, and other "speed parts" were as close as local auto stores.

Though Ford briefly considered retaining it, the low-selling Sportsman was dropped for '49 and other offerings regrouped into Standard and Custom series. The former offered six and V-8 Tudor and Fordor, along with business and club coupes. The better-trimmed V-8-only Custom deleted the business coupe but added a convertible and a new two-door structural-wood wagon (replacing the previous four-door style).

Prices rose again for 1949, the range now $1333-$2119. Over­drive was optional across the board at $97. Ford wouldn't have its own automatic transmission until 1951, though it tried to get one earlier. Studebaker had developed an excellent automatic for 1950 in association with Warner Gear. Ford wanted to buy it for its cars, but Studebaker refused -- much to its later regret.

The '49 Fords suffered handling and noise problems stemming from the rushed design program. Workmanship also suffered for the same reason, and a 24-day auto workers' strike in May 1948 didn't help either. Even so, these were very worthy automobiles -- the first tangible evidence that Henry II was firmly in charge. Ably assisting him was the youthful "Whiz Kids" team of executives and engineers he'd recruited, including one Robert S. McNamara.