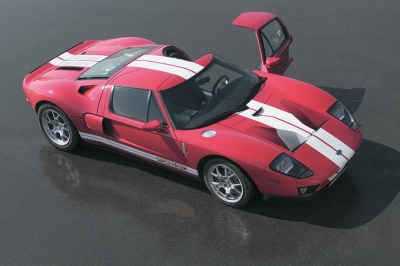 The charismatic and street-legal Ford GT, shown here in a 2005 model, impressed both car buffs and the general public alike.

Saving the best for last brings us to the 2004-06 Ford GT. One of the most charismatic roadgoing sports cars ever built, it was nothing less than a modern but faithful, street-legal reincarnation of Ford's legendary midengine GT40 endurance racer, four-time winner of the grueling 24 Hours of LeMans (1966-69), the ultimate "Total Performance" Ford.

Previewed as an engineering prototype at the 2002 North American International Auto Show in Detroit, the GT was developed for production by a small dedicated team. The goal was to have it ready in time for Ford Motor Company's huge June 2003 centennial gala in Dearborn.

The team had just 16 months but kept the appointment, and the first three production examples delighted the thousands in attendance.

The GT arrived with one major glitch: lower suspension control arms that proved prone to cracking because of faulty casting. Ford swallowed its pride and recalled all 448 GTs built in 2004, the first full production year. The arms were replaced, and a new casting method devised.

The GT looked nearly identical to the GT40, but was built on a foot-longer wheelbase of 106.7 inches. Acceptable road-car passenger space was the rationale, but the cockpit was still race-car cozy for six-footers. Overall length-width-height measured 182.8x76.9x44.3 inches.

The GT40 had been named for its rakish 40-inch height, so that designation would have been technically incorrect here. But "GT44" didn't sound right, and another company had legal claim to "GT40" and wouldn't give it up, hence the simple GT moniker.

Despite sharing the same classic lines, the GT was better than the GT40 in many ways, thanks to 40 years of technical progress. Take aerodynamics. Because the basic body shape acted like an inverted wing, the GT40 was infamous for being less-than-stable at racing speeds. Not so the GT, the result of several effective modifications that were very hard to spot. Small front air "splitters" created downforce at the nose, while side splitters beneath the doors worked together with an enclosed bellypan to smooth airflow on the way to rear "venturi" exits.

Both cars employed an aluminum space-frame overlaid with aluminum panels, but the GT benefited from manufacturing techniques unknown in the 1960s. As a result, it was claimed to be 40 percent stiffer than Ferrari's formidable F360 Modena, a key rival, yet curb weight was just under 3400 pounds, more than respectable for a fully dressed road car.

Power by Ford was a must, so the GT received a supercharged version of Ford's all-aluminum 5.4-liter V-8. Unique twincam heads with four valves per cylinder, dual fuel injectors at each port, and heavily fortified internals boosted output to rarefied levels: 550 bhp and 500 pound-feet of torque.

Ford proudly noted that these numbers were comparable to those of 7.0-liter racing GT40s. A twin-disc clutch and Ricardo six-speed manual transaxle conveyed all the might to the rear wheels through a helical limited-slip differential. Braking was by massive Brembo-brand four-wheel discs of 14 inches across in front, 13.2 in back, all cross-drilled and clamped by four-piston monoblock calipers under antilock control.