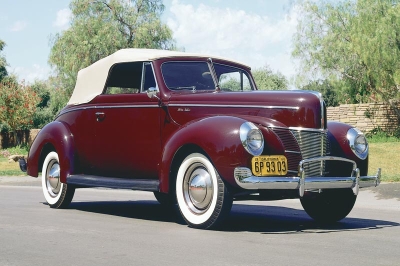 Ford stepped up the competition against Chevy with models such as this 1940 Deluxe Ford Convertible.

Gregorie made Fords even prettier for 1940 -- so much so that the DeLuxes in particular have long been coveted collectibles. Sealed-beam headlamps arrived, as elsewhere in Detroit, ­neatly housed in more upright fender nacelles.

Some dealers had been disappointed in Edsel Ford's new Mercury, feeling a six-cylinder Ford would have been a better idea (which was, in fact, the original concept). Edsel promised a six, then had to reckon with his father. But Henry approved it in one of those strange turnabouts for which he was infamous. Edsel went to work, and the new L-head six bowed for 1941. With 226 cid and 90 horsepower, it had five more cubic inches than the V-8 and a like number of extra horsepower -- a bit embarrassing.

The '41s were the biggest, flashiest, and heaviest Fords yet. Wheelbase stretched two inches to 114, bodysides ballooned outward, and a stouter frame contributed to an average 100 pounds of added curb weight. Styling was evolutionary, with wider, more-integrated front fenders; a busy vertical-bar grille with tall center section flanked by low subgrilles; larger rear fenders; and more-rakish coupe rooflines. The lineup ­expanded, too: low-priced Special, midrange DeLuxe, and new Super DeLuxe, all offered with either six or V-8. Prices ranged from $684 for the six-cylinder Special coupe to $1013 for the V-8 DeLuxe woody wagon -- the first factory-built Ford to break the $1000 barrier.

But none of this did much for sales. While Ford's total volume improved to near 691,500, it remained about two-thirds of Chevy's, which went up even more, to slightly over a million.

The 1942 Fords gained a lower, wider, vertical-bar grille surmounted by rectangular parking lamps in the vestigial catwalks. The V-8 was pushed up to the same 90 horsepower as the six -- likely by the stroke of a engineer's pen. If the V-8 had to cost more, Ford reasoned, it should have at least as much power, even if only on paper. Specials were now sixes only, but the lineup was otherwise unchanged. Prices were hiked about $100 throughout. Ford built just 43,000 cars from January 1 through February 2, when the government ended civilian production for the duration of World War II. At that point, Ford's1942 model-year total was just shy of 160,500 cars, versus Chevy's quarter-million-plus.