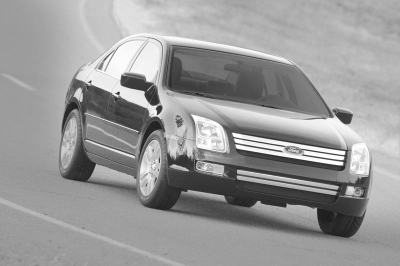 The 2006 Ford Fusion, shown here, was slated to "put Ford back in the car game."

Hopes were high for the 2005 Five Hundred and '06 Fusion sedans. Bracketing the Taurus in size, price, and character, they represented an end run around the problem of competing head-on with the perennially popular Accord and Camry.

The Five Hundred could have replaced the Crown Victoria: over a foot shorter overall and some 500 pounds lighter, yet no less spacious on a wheelbase just 1.8 inches trimmer. The secret was high-profile styling with an overall height of 61.5 inches, up 3.2 inches on Crown Vic and 5.4 on Taurus.

Ford used this to elevate seating some four inches above that in most other cars. The tall body also provided a more natural seating posture front and rear, plus vast trunk space. Another talking point was a new unibody corporate platform.

Known within Ford as D3, it was designed in collaboration with Volvo to be very strong except in a crash, when it would absorb energy in a controlled, protective fashion. Optional "passive safety" pluses were front torso side airbags, plus curtain side airbags that deployed from the ceiling above the side windows. Serving "active safety" were standard antilock four-wheel disc brakes and traction control.

Though classed as a large car by Consumer Guide®, the EPA, and others, the Five Hundred arrived with a midsize-car engine: a modestly improved "Duratec 30" twincam V-6 with 203 bhp. Drivelines were brand-new, however. Most front-drive models employed a six-speed automatic -- Ford's first -- and there were all-wheel-drive versions with a "gearless" continuously variable automatic transmission (CVT).

The AWD/CVT combination was unique among family cars and thus somewhat risky, but many buyers took a liking to Five Hundreds so equipped for their all-weather traction and promise of good fuel economy.

Most all the above also applied to Freestyle, essentially a Five Hundred wagon marketed as a "crossover" SUV in a market where "station wagon" rivaled "minivan" as a kiss of death for sales.

Slightly larger than Explorer, with lots of room, nice looks, pleasant driving manners, and competitive $25,000-$30,000 pricing, the Freestyle should have sold like 25-cent Starbucks lattes. Instead, it managed fewer than 85,300 orders from launch through the end of 2005.

That was so far below expectations that Ford briefly considered dropping the Freestyle after just three model years. Cooler heads prevailed, however, and the twenty-first-century Country Squire was given an indefinite reprieve.

The Five Hundred fared better at more than 122,000 sales for the same period, but that didn't help Ford's bottom line very much. Some critics blamed tepid buyer response on me-too styling, citing a close resemblance with the six-year-old Volks­wagen Passat. The similarity was easy to explain. J Mays had succeeded Jack Telnack as Ford design chief in 1997, and Mays had helped shape the Passat in his previous job at VW/Audi.

There was no visual cribbing in the 2006 Fusion, the second prong of Ford's latest assault on the high-volume family car market. A good thing, too, because this "new" midsize sedan was already familiar, amounting to a slightly enlarged Mazda 6 without the "zoom zoom" pretensions.

Most everything hidden was the same or very similar: adept all-independent suspension, standard four-wheel disc brakes, even engines: base 2.3-liter four (originated by Mazda) and available Duratec 3.0 V-6. But it wasn't a complete copy. The Mazda, for example, offered both engines with manual and automatic transmissions, while V-6 Fusions were confined to automatic.

The Ford also had somewhat softer suspension tuning because it wasn't trying to be as sporty as the Mazda. It also claimed more rear-seat room, thanks to an extra 2.1 inches in wheelbase.

Styling, of course, was the most obvious difference, and many thought the Fusion was better looking. It was certainly hard to miss with its bold three-bar grille, a signature destined for future Ford cars (plus an early Five Hundred facelift) and a dim nod to 1966 Galaxies.

Fusion bowed in S, SE, and top-line SEL versions. The last were the nicest inside, with contemporary metal-look accents, tasteful "piano black" panels instead of the usual test-tube wood, easy-read gauges, and convenient, logical controls. Regardless of trim, Fusion showed the same good workmanship as the Five Hundred, the best ever from Ford and fully competitive with Accord and Camry.

Even materials were better than expected for the prices. The prices were right, running from just over $17,000 to near $22,000 before options. Ford held back on some standard features to make those numbers, charging extra for traction control, torso and curtain airbags, and antilock brakes, but at least the charges were reasonable.

Though Fusion was just emerging as this book was prepared, first reviews and early sales reports suggested Ford had come up with a winner. Car and Driver, for one, thought that with "stylish looks, fine road manners, practical configuration, and aggressive pricing, the Fusion should make a strong impact in the mainstream-sedan segment -- and truly put Ford back in the car game."

Dearborn must have rejoiced, because upscale Fusions with different styling and feature mixes would have the daunting task of luring new buyers to Lincoln and Mercury, nameplates already given up for dead in many quarters.