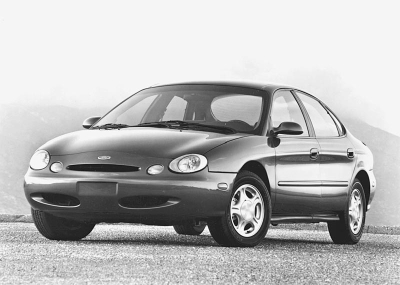 The all-new 1996 Ford Taurus shown here was dubbed by one journalist as having a "pre-dented" look.

Chairman Alex Trotman hoped another daring design would grab the public like the original Taurus had and turn the styling spotlight away from the new "cab-forward" Chrysler/Dodge models competing with Taurus. At one point, Trotman reportedly walked through the styling studio, looked around, and said to those present, "You're not scaring me enough."

Unfortunately for Ford, the result must have scared off some buyers, for Taurus promptly lost its standing as America's top-selling car line and would never get it back. One wag thought the '96 model so odd as to imagine, "If they could have made oval wheels work, they'd have used them."

There were ovals ­aplenty inside too, including a large one in the middle of the dash with oddly curved arrays of look-alike pushbuttons for audio and climate functions. Neither critics nor many consumers were amused.

More's the pity, for the 1996 model represented a major improvement over past Tauruses in many ways. The value-oriented GL sedan and wagon got an updated Vulcan pushrod V-6, while the nicer LXs were treated to a 3.0-liter version of the twincam Duratec V-6 with 200 bhp, considered by many buyers to be well worth its $500 premium.

Topping the line was a new SHO with 235 bhp from a 3.4-liter V-8, another Ford-Yamaha collaboration. Wheelbase on all models added 2.5 inches, benefiting rear leg room, as well as handling in concert with a revised suspension.

But certain rivals, notably the Honda Accord and Toyota Camry, now had a slight edge in ride ­quality, a big one in build quality -- and were fighting fiercely for Taurus's number-one sales spot. Worse, price hikes of around $1000 chilled early demand, prompting the addition of a detrimmed price-leader G sedan during the '96 season.

Yet for all the controversy, Taurus sales remained strong, actually improving by some 11 percent for 1996 over the prior model year. Volume then held at around 400,000 through 2000. But Taurus still relied far more on fleet sales each year than its leading Japanese-brand rivals, so Ford earned somewhat less on every sale and owners received less at trade-in time.

Ford was more on target with a redesigned Escort that rang up more than 655,000 sales for model years 1997-98 and more than 100,000 each for '99 and 2000. The previous Mazda Protege-based design returned with a smooth new wrapper and a 110-bhp 2.0-liter single-cam Zetec four-cylinder, thus ousting the old CVH engine at last. Models comprised two sedans and a wagon at first, a single sedan after 1999. All aimed to provide nothing more than economical yet stylish transportation at a low price, which was all many people needed.

Pricing probably helped close many a sale. Even with a heavy option load, these Escorts seldom broke the $17,000 barrier, yet they were more refined and better built than previous models, enough to stand comparison with some import-brand rivals. But they were only a short-lived bridge to the year 2000 and the debut of a far more ambitious small Ford.

Despite its seeming lame-duck status, Escort kept selling well enough that Ford decided to keep it around longer than planned, offering a special fleet sedan to nonretail customers for 2001-02.

For those who missed Escort's spunky GT hatchback, Ford offered the new 1998 Escort ZX2, a sporty coupe with a separate trunk and Taurus-like styling. Appearances notwithstanding, basic architecture and underskin components were shared with other Escorts, while the engine was the same twincam Zetec found in the base Contour. With 130 bhp and relatively low weight (2470 pounds), the ZX2 was frisky, though no neck-snapper. Signaling its mission of wooing younger, cash-short enthusiasts, it initially came in "Cool" and better-equipped "Hot" versions.

Yet once again, Ford's aim was slightly off. Consumer Guide® and others thought ZX2 a bit pricey for what it delivered: $12,580 base for a '98 without air conditioning. And though Ford trimmed $1000 off the price of a "Cool" model for '99, CG repeated that "…ZX2 looks sportier than it performs."

This must have sounded all too familiar to Ford folks who remembered the unlovely and unloved EXP. A zippy $1495 SR package was added for 2000 with an extra 13 horses, tuned suspension, four-wheel disc brakes, alloy wheels, performance tires and special seats, but it did nothing to spark sales.

By 2002, the ZX2 (minus Escort badging) was down to some 52,000 calendar-year orders, then slid below 25,500, a poor showing for the low- to midteens pricing. Ford stayed the course one more year, then abandoned the sporty-coupe market, which was fast shrinking anyway.