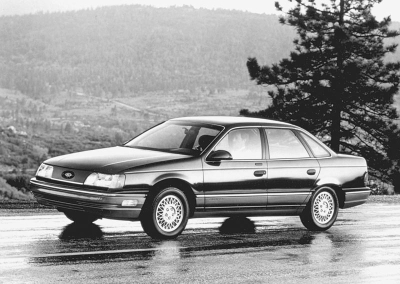 Ford's other 1992 freshening involved the top-selling Taurus. With competitors pushing hard, the basic '86 design was now in need of an update, so Ford spent a cool $650 million to give it one. Much of the money went toward things that didn't show but made a good car even better, particularly in the areas of noise, vibration, and harshness (NVH).

Among these were a stiffer unibody structure, a suspension revised for a smoother ride with no harm to handling, more-responsive power steering, extra sound-deadening in strategic places, engine adjustments for improved drivability, and a more-precise solid-rod shift linkage for the dashing SHO. Ford also dropped the weak four-cylinder engine, which pleased some buyers apart from rent-a-car companies.

Inside, the '92 Taurus presented a redesigned dash with subtle ergonomic refinements and space for a newly optional passenger airbag. Outside was…a disappointment. Though every body panel was new save the doors, the '92 was hard to tell at a glance from previous Tauruses -- as critics loved to point out. But buyers didn't seem to care.

The '95 tally was almost as good: just over 410,000. Like Escort, Taurus wouldn't see another major change until late decade. The most-important interim development was standardizing the passenger air bag for '94. An interesting '95 variation was the SE (Sport Edition) sedan, a kind of budget SHO delivering alloy wheels, rear spoiler, sport front seats, and other extras for about $18-grand with base 3.0-liter V-6 or just under $20,000 with the punchier 3.8. Interestingly, the smaller "Vulcan" V-6 got some needed NVH improvements in preparation for the all-new second-generation Taurus.

Let's not forget the 1992-95 SHO, which gained greater visual distinction through more-aggressive styling front and rear, plus bolder cladding for the lower bodysides. In addition, Ford finally added a four-speed automatic to the SHO's option list for 1993.

To maintain performance parity with the five-speed model, the 3.0-liter Yamaha V-6 was enlarged for the shiftless SHO to near 3.2 liters (192 cid), yielding a useful 20 extra pound-feet of torque (220 in all), though no more horsepower. SHO pricing remained unusually steady in these years, but neither that nor the automatic was much help to sales.

With base stickers straddling $25,000, the top-line Taurus still faced competition from a host of formidable foreign sports sedans and usually suffered by comparison. But though eclipsed by those cars for image -- and ultimately by a V-8 successor for perfor­mance, the V-6 SHO was a rewarding driver's car with a pleasing blend of American and European characteristics.