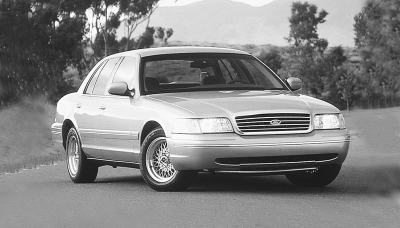 Ford modernized two more of its cars for 1992. First up was a replacement for something even older than the original Escort: the big, vintage '79 Crown Victoria.

Reaching showrooms in March 1991, it was virtually all-new despite retaining the basic rear-drive "Panther" platform and wheelbase. There was new styling, of course: smooth and rounded in Dearborn's now-expected "aero" mold, but not "jellybean" chunky. A grilleless Taurus-type face replaced the dated standup eggcrate.

Other passe stuff like vinyl roof covers, opera lights, and wire-wheel covers was forgotten, too. So was the LTD name -- but also the Crown Vic wagon, Ford having concluded that minivans and sport-utility vehicles had now largely replaced traditional full-size wagons in buyer affections. That left a four-door sedan with airy "six-light" roofline in base and uplevel LX trim; a sportier Touring Sedan was added in the fall.

Like its 1990 makeover of the aged Lincoln Town Car, Ford went much further with this new Crown Victoria than was absolutely needed to satisfy the market. Where GM was content to merely rebody its largest cars, Ford overhauled the chassis, adding standard all-disc brakes with optional antilock control and making numerous tweaks to steering, springs, shocks, and suspension geometry. The result was surprisingly agile and responsive for a traditional full-size Detroiter and a vast improvement over the old Crown Vic. It was also a more-potent big Ford with adoption of the 4.6-liter overhead-cam V-8 first seen in the '91 Town Car.

The first member of Dearborn's new "modular" engine family, it delivered 190 standard bhp or 210 with dual exhausts, a gain of 40-50 horses over the old pushrod 302. The uprated engine was included in a Handling and Performance package that was standard for the Touring Sedan and optional on other models.

As its name implied, this also delivered firmer damping and wider wheels wearing performance tires, as well as ABS and traction control. All models came with a driver-side air bag per Washington's insistence; a passenger-side restraint was also available.

Buyer requests prompted the addition of conventional grille for '93, when the Touring was dropped. The passenger airbag became standard for '94. The '95s got a mild facelift, "gullwing" taillights, revised climate controls and newly standard rear defroster, heated door mirrors, a radio antenna embedded in the rear window, a "battery-saver" feature, and displays for outside temperature and "gallons to empty." Even with all these additions, base price was comfortably below $25,000.

Incidentally, the Crown Vic became an "import" for a few years in the early '90s, built north of the border with a high level of Canadian content. The reason was CAFE, the Corporate Average Fuel Economy law that took effect with model-year '78 but had lately been relaxed somewhat.

Still, the Crown Vic had fair thirst (about 17 mpg city, 25 highway, as rated by the Environmental Protection Agency) and was thus a drain on Ford's domestic fleet-average economy. As an "import," the Crown Vic counted in Ford's non-domestic CAFE along with the tiny South Korean-built Festiva, whose really high mileage more than offset the big car's.

Later, Ford didn't need such tricks to comply with CAFE, so parts and labor were re-sourced to make the Crown Vic truly "American" again. Such is the silliness sometimes wrought by well-meaning regulations.