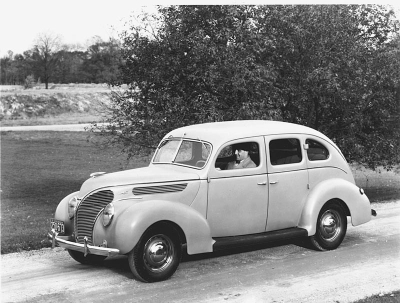 The Ford station wagon, introduced as a 1929 Model A, had a body constructed of birch or maple supplied by the Mingel Company of Kentucky; assembly was by Murray and Briggs in Detroit. Starting in 1935, Ford built these bodies itself in a plant at Iron Mountain on Michigan's Upper Peninsula, an ideal location because of nearby hardwood forests that minimized transportation costs.

A fuller look marked the 1935 Model 48 Fords, with smaller windows and a more prominently Vee'd grille than 1933-34. Also new was an integral trunk for sedans. It added a bulky "bustle," but erased the increasingly old-fashioned external trunk rack and spare tire. A new camshaft and better crankcase ventilation further enhanced the lively V-8, and the frame and rear axle were beefed up.

Retained from Model T times was an exceedingly simple suspension: just a solid axle on a transverse leaf spring front and rear, an archaic setup that wouldn't be abandoned for another 13 years. This and the use of mechanical brakes through 1939 left Ford distinctly behind the times, but old Henry believed simpler was better, and he was nothing if not stubborn. Still, he did give in to steel wheels, which replaced traditional wires after 1935.

Ford made only minor styling changes for 1936, but they were good ones. The most obvious were a longer, more-pointed hood and a more sharply Vee'd grille to match. Industry design trends dictated hiding some previously exposed components, so horns now hooted from behind little covered holes astride the grille. Model choices were still numerous, but Standard and DeLuxe were now distinct series, with the latter listing twice as many body styles (seven to 14).

Offerings expanded for '37 with the addition of a small-bore 136-cid V-8, originally devised for the European market to take advantage of tax laws based on displacement. In America it came to be called the "V-8/60," as it produced that much horse-power. But though it made for cheaper new Model 74 Fords in a year of generally higher car prices, it didn't sell nearly as well as expected. Buyers evidently preferred higher performance over lower retail cost. Economy was supposed to be a strong point, but really wasn't. With this development, the familiar 221 flathead became known as the "V-8/85." For 1937 it benefited from improved cooling via relocated water pumps, plus larger insert bearings, and new cast-alloy pistons. It again powered Standards and DeLuxes now designated Model 78. V-8/60s were Standard-trim only.

Responding to GM's 1936 "Turret-Top" bodies, Ford adopted all-steel construction for 1937 closed models, belatedly discarding the fabric roof inserts of old. But this was easily overshadowed by crisp new bodies with headlamps nestled firmly in the fenders and a prow-type grille composed of fine horizontal bars (stretched rearward at the top). This and a lighter overall look made the '37 Ford one of the prettiest cars of the decade. President Franklin D. Roosevelt liked it enough to buy a convertible sedan for use at his Warm Springs, Georgia, retreat. In a year of questionable styling throughout the industry, Ford was a standout -- proof that streamlining didn't necessarily mean an end to distinctive, eye-pleasing automobiles.

The 1938 line ushered in "two-tier styling" for 60-bhp 82A and 85-bhp 81A series. Where Standards used slightly modified 1937 bodies, DeLuxes sported a different, new look. The romantic roadster was history, and the equally old-fashioned phaeton (a throwback to touring-car days) was in its final season.

Both body styles had long since lost whatever favor they once had, but Ford was far behind its rivals in realizing this fact (Plymouth's last roadster and phaeton appeared in 1932, Chevrolet's in '35). Closed rumble-seat types were also in their last year. With sales still slow, the V-8/60 line was reduced to just a coupe, Fordor, and Tudor. Styling for all models was a variation on 1937 themes, announced by more-bulbous faces.

DeLuxes were again fully restyled for 1939, bearing a lower Vee'd vertical-bar grille and clean front fenders with integral headlamps. As in recent years, this styling was created by E.T. "Bob" Gregorie under Edsel Ford's guidance.

By contrast, that year's Ford Standards looked like warmed-over '38 DeLuxes. The convertible sedan made a final bow, again in the DeLuxe line. Prices rose slightly, now covering a $599-$921 spread. Mechanical changes included internal engine enhancements inspired by the new Mercury and hydraulic instead of mechanical brakes. Old Henry had finally given in on the latter point -- three years after Chevrolet and 11 years behind Plymouth. But Ford still couldn't match their independent front suspension, and wouldn't until 1949.