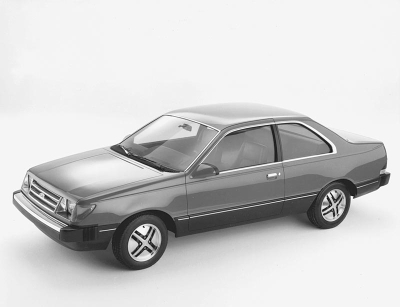 The Ford Tempo proved to be yet another fast-selling, low-priced Ford model. The 1984 Ford Tempo GL coupe is shown here.

Filling Fairmont's shoes for 1984 was a new front-drive compact called Tempo, a notchback four-door and coupelike two-door with "jellybean" styling on a 99.9-inch chassis with suspension much like Escort's. Power came from a 2.3-liter four, only it wasn't the Pinto/Fairmont ohc "Lima" unit but a cut-down version of the old overhead-valve Falcon six, rated at 84 horsepower.

It didn't work that well, but Ford tried to make it better, fitting throttle-body injection and adding a 100-bhp "H.O." (high-output) option for '85. The latter somehow lost six horsepower by '87, then returned to its original rating. Several trim levels were offered, including better-equipped Sport versions with the more powerful engine and firm suspension. Escort's 2.0-liter diesel option was listed through '86, but generated few sales. The standard manual transaxle shifted from a four- to five-speed after '84, with a three-speed automatic optional all years.

Tempo was treated to a mild flush-headlamp facelift for 1986, when it also became one of the first low-priced cars to offer an optional driver-side air bag. The following year brought another interesting new option: all-wheel drive, a part-time "shift-on-the-fly" setup intended for maximum traction on slippery roads, not dry-pavement driving or off-roading.

For 1988, Tempo four-doors were reskinned to look like junior versions of the new midsize Taurus, an effective "nip-and-tuck" operation. A new, rather Japanese-looking dash was shared with unchanged coupe models. Offerings now comprised base GL and sporty GLS coupes and sedans, plus four-door all-wheel drive and luxury LX models. Tempo then marked time for 1989-90 aside from price/equipment shuffles.

Despite prosaic mechanicals and increasingly tough compact competition, Tempo proved another fast-selling Ford. It averaged 371,000 buyers in its first two seasons and another 280,000 for 1986-87. Sales then turned strongly upward for 1988-89, breaking the three-quarter-million mark for the two years combined. Dearborn designers and decision-makers evidently had the inside track on what appealed to American buyers.

Yet, even they were likely surprised by the success of Taurus, the front-drive 1986 replacement for the junior LTD in the all-important midsize market. Riding a 106-inch wheelbase, these four-door sedans and four-door wagons represented Ford's strong­est-ever claim to Detroit design leadership: clean, smooth, and carefully detailed, yet not lumpy like some other low-drag "aero" cars. Dominating the spacious interiors was an obviously European-inspired dashboard with some controls sensibly copied from the best of BMW, Mercedes-Benz, and Saab.

As expected, Taurus engines mounted transversely in a chassis with all-independent suspension. Sedans used MacPherson struts and coil springs at each corner, supplemented at the rear by parallel control arms. Wagons eschewed rear struts for twin control arms, a system better able to cope with the wider range of load weights wagons carry.

Initial engine choices began with a 2.5-liter 88-bhp four, an enlarged Tempo unit available with standard five-speed manual or, from late '87, optional four-speed overdrive automatic transaxles. Most Tauruses, though, were ordered with the new port-injected 3.0-liter "Vulcan" V-6, a 60-degree overhead-valve design rated at 140 bhp and teamed with automatic only.

For 1988, Ford added a reengineered version of its 90-degree 3.8-liter V-6 as a new option. Horsepower here was also 140, but the 3.8's extra torque provided quicker acceleration than the 3.0. With its ultramodern styling, good performance, and prices far lower than those of certain covetedGerman sedans, Taurus charged up the sales chart like a bull in a china shop. Ford sold over 236,000 of the '86s and nearly 375,000 for '87 -- astounding for what was, after all, a very daring departure for a middle-class American car.

But there were still those who wanted a Taurus with performance and mechanical specifications as sophisticated as its styling. They got one, and 1989 was showtime -- or rather SHO time: a new "Super High Output" 3.0 V-6 with overhead-cam cylinder heads and four valves per cylinder (instead of two), plus dual exhausts.

Nevertheless, the SHO was a very slow mover on the sales chart, mainly because there was no automatic option and the mandatory Mazda-supplied manual five-speed suffered balky, high-effort shift action. Production was thus meager through 1990: about 25,000 or so. But Taurus as a whole kept up its initial rip-snorting pace, besting 387,000 for '88, 395,000 for '89, and 333,000 for recession-plagued 1990. Thoughtful yearly upgrades helped. Among the most thoughtful: optional anti-lock brakes for sedans and a standard driver-side air bag for all 1990 models.