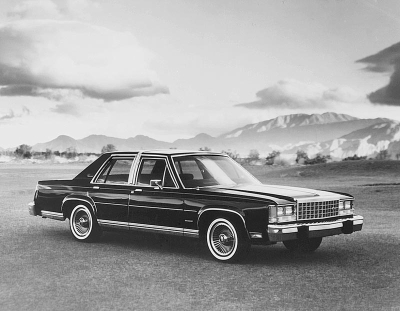 Ford produced "Detroit-style" luxury cars throughout the 1980s with models such as this 1983 Ford LTD Crown Victoria.

Another constant of Ford's 1980s fleet was the full-size 1979-vintage LTD, which continued beyond 1990 with just minor yearly alterations to equipment, styling and engines.

Despite the year-to-year sameness, many buyers still craved big, Detroit-style luxury, and the fact that fewer such cars were available as gas became cheaper again only worked in the Crown Vic's favor. Though sales fluctuated, this line was good for an annual average of well over 118,000 -- considerably more in some years. As late as 1990, Crown Vic did a healthy 74,000. By that point, though, the cars themselves were sourced ­mainly from Canada.

While Fairmont continued carrying Ford's banner in the compact segment, two derivatives served as the division's midsize warriors. First was a new 1981 Granada, basically the two- and four-door Fairmont sedans with a square eggcrate grille, bulkier sheetmetal, and somewhat plusher appointments. Fairmont wagons transferred to this line for '82. This Granada sold respectably: about 120,000 a year. Engines were the same as Fairmont's: standard 2.3-liter four, optional 200-cid six, and "fuel crisis" 255 V-8 (the last eliminated after '81).

For 1983, Granada was transformed into a "small" LTD -- as opposed to the "big" LTD Crown Victoria. This was also an uptown Fairmont, restyled with a sloped nose, airier "six-light" greenhouse, and modestly lipped trunklid.

Sales tapered off along with the economy, dropping from the first-year high of nearly 461,000 to less than 81,000 by 1983. Still, that was a fine showing in a turbulent period. The Fairmont had more than done its job.