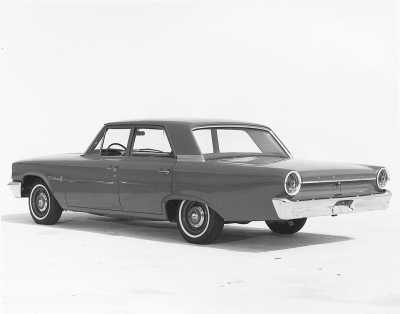 What we now call the full-size Fords began the decade with all-new bodyshells that would persist through 1964. The '60s were much longer, lower, wider, and sleeker than the boxy '59s, and even mimicked Chevy's batfins a little, but they looked good with their chrome-edged beltlines and bigger glass areas.

The Skyliner was gone, but there was a new fixed-roof Starliner hardtop coupe with sleek semifastback profile. Though less popular than square-roof Galaxies, the Starliner was just the thing for NASCAR racing by dint of its slipperier shape.

Starliner bowed out after 1961, when standards were face­lifted via a full-width concave grille (with '59-style insert) and a return to round taillights capped by discreet blades. That year's top engine option was the new 390-cid version of the FE-series big-block. This packed 300 standard horsepower, but was available, though on a very limited basis, as a high-compression "Interceptor" with 375 and 401 horsepower.

New lower-body sheetmetal gave the 1963 "Super-Torque" Galaxies a cleaner, leaner look, announced by a simple concave grille. A pair of cheap "300" sedans was added (renamed Custom/Custom 500 for '64), and there was more midyear excitement in a set of 500 and 500XL sports hardtops with thin-pillar "slantback" rooflines, a bit starchier than the old Starliner but again aimed right at the stock-car ovals.

The last, but most-substantial, restyle on the big 1960 body occurred for '64, bringing heavily sculptured lower-body sheet-metal, a complex grille, and slantback rooflines for all closed models.

The entire Ford line won Motor Trend magazine's "Car of the Year" award, partly because of the division's ever-widening "Total Performance" campaign. Performance was just what the big Fords had, with available small-block and big-block V-8s offering from 195 up to a rousing 425 horsepower. Even a relatively mild 390 XL could scale 0-60 mph in 9.3 seconds; a 427 reduced that to just over 7 seconds. The one major complaint was a marked tendency to nosedive in "panic" stops, aggravated by overboosted power brakes.

Ford had its best NASCAR year ever in 1965, winning 48 of 55 events, including 32 straight at one point. Luxury, however, got most of the showroom emphasis. All-new except for engines, the '65s were distinguished by simpler, more-linear styling announced by stacked quad headlamps. Underneath was a stronger chassis with a completely new front suspension evolved from NASCAR experience.