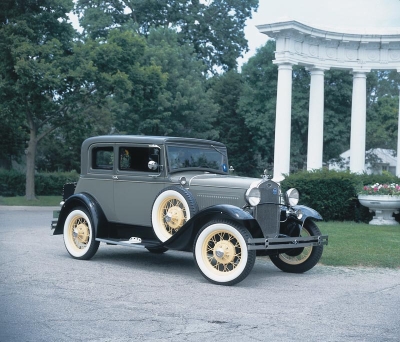 Early Ford models, such as this 1931 Ford Victoria, created plenty of buzz in the industry.

Henry Ford had once contemplated a radical X-8 engine for the long-overdue Model T replacement, but ultimately settled for a more-conventional V-8 on which Ford engineers discreetly began work in 1930. But it was delayed by the peculiar conditions Henry imposed on his engineers, so the Model A appeared with only four-cylinder power as an interim measure. Model A production ended in autumn 1931, though sales continued through April 1932.

Then came a revised four-cylinder car, the Model B. Both this and the new 1932 V-8 Model 18 shared evolutionary styling, a 106.5-inch wheelbase (up three inches from the A's), and the same broad body-style array. The big difference, of course, was under the hood. The V-8 was a tremendous bargain: Standard roadster, coupe, and phaeton all listed below $500. Still, many buyers were wary, so Ford kept four-cylinder cars through 1934.

Ford's first V-8 was that now-famous cast-iron flathead that initially delivered 65 horsepower from 221 cubic inches. That compared with 40/50 horsepower from the 200.5-cid Model A/B four. With a relatively sensational top speed of 78 mph, the peppy V-8 Ford caused a storm of public interest, garnering over 50,000 advance orders. Millions flocked to see it on its March 1932 unveiling.

The old man kept a close watch over the V-8's development, badgering his engineers and telling them what to do. His perceived need for getting the engine to market as soon as possible left insufficient time for durability testing, so troubles surfaced early. Cylinder-head cracks and excessive oil burning were the most common, but some engine mounts worked loose and ignition problems cropped up. Though Ford replaced pistons by the thousands to ease owner worries, the engine difficulties hurt sales. But they'd be cleared up soon enough, and the V-8 became known as a reliable powerplant that could stand considerable "heating up." Hot rodders loved it.

Fords looked more flowing for 1933, reflecting Detroit's swing to streamlining. Edsel Ford had been an important force in Dearborn design for some time, and his tasteful new '33 Ford was universally applauded. The hood now extended back to the windshield, fenders were "skirted" and dipped low in front, sharp corners were rounded off, and rear-hinged doors appeared on closed models. Helping all this was a wheelbase lengthened to 112 inches (where it would remain through 1940) and a wheel diameter shrunk to 17. V-8 durability kept improving, and the frame was completely redesigned. With V-8 production at full strength, Ford's model-year volume rose by 100,000 cars -- impressive for difficult 1933, but not enough to beat Chevrolet. Still, the speedy Ford V-8 was attracting a legion of fans. Among them was no less than John Dillinger, who wrote Henry to praise the product -- an unsolicited testimonial from Public Enemy Number One.

Appearance became smoother still on 1934's 40A line. The V-8 itself got a new carburetor and manifold that increased advertised horsepower to 85 -- some claim actual power was 90. By now, most of its early problems were just bad memories. The four-cylinder engine was breathing its last. The Standard two-passenger coupe still sold for little more than $500, while the DeLuxe Fordor cost only $615. Safety glass was newly ­featured on closed models.