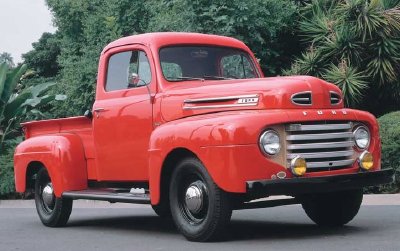 This 1948 Ford F-1 truck was one of the first of Ford's popular F-1 series of trucks. See more pictures of trucks.­

Ford Motor Company got its start in much the same manner as most other automobile manufacturers of the early 1900s: A mechanical genius joined forces with financial investors to build their own version of the American dream. What made Ford different from most others was innovation and wise management that has allowed the company to survive for more than 100 years.

A fledgling automobile industry already existed at the dawn of the 20th century, but these early "horseless carriages" were primarily the domain of the rich. Henry Ford and Ford Company changed all that with the Model T. But it wasn't just the car itself that brought personal transportation to the masses; it was a combination of good management, a solid sales organization, and the miracle of mass production.

­­­While Ford Motor Company got its start building automobiles, an interest in commercial vehicles was evident almost from the beginning. Though early attempts at building trucks met with limited success, it was recognized that they were a useful commodity just waiting for the market to realize it.

The first of these trucks appeared in 1905, just two years after Ford's first automobiles. It was fitted with a boxlike cargo body behind the driver's seat, and while a useful conveyance, the Delivery Car was pulled from the market after just one year due to slow sales. A similar vehicle was introduced in 1912 on the Model T chassis, but it didn't exactly set the world afire, either.

By this time, various types of truck-type bodies were offered by outside suppliers for the Model T chassis, including everything from pickup beds to fire apparatus. But to most historians, the history of Ford trucks begins with the Model TT of 1917.

Though based on Model T mechanicals, the TT was a one-ton-rated truck. It carried unique features -- such as a beefy frame, worm-gear differential, and solid-rubber rear tires -- all aimed at providing a much higher payload capacity than the light-duty Model T chassis. It came only as a chassis with cab at first, with cargo bodies being supplied by outside companies; not until 1924 did Ford offer it with the Express body, essentially a pickup bed. Unlike previous commercial-vehicle attempts, it was a strong seller from day one.

Nineteen seventeen also brought another Ford workhorse: the Fordson tractor. Henry Ford had grown up on a farm and thus knew the rigors of the trade, and the Fordson was an attempt to do for rural areas what the Model T did for urban ones. And that it did; within months of going on sale, it became the best-selling tractor in the country. Because the Fordson contributed so much to the company's early success and often shared technology with its road-going brethren, these tractors have also been given exposure in Ford Truck Chronicle.

From there, Ford expanded into heavier-duty trucks: first the 11/2-ton Model AA of 1928, then to bigger rigs that were rated at up to three tons by the late Forties. In the ensuing years, Ford expanded its lineup to include trucks in the highest weight classes, and all -- from light-duty through medium-duty to heavy-duty.

Ford contributed mightily to the war effort during World War II, the company's vast resources being called upon to build a wide range of material used on land, sea, and air. Yet unlike some enterprises, Ford Motor Company did not emerge from the war on a strong financial footing. In fact, it was near collapse when Henry Ford II -- the founder's grandson -- took over, and, along with a wisely chosen cadre of associates, brought the company back.

One of the vehicles that helped the turnaround was Ford's first all-new postwar truck. Arriving for 1948 -- a year ahead of Ford's first new postwar car -- it was a pickup that would go on to become a classic: the F-Series.

Initially called the F-1 in popular 1/2-ton form, the designation was changed in 1953 by adding "00" to the end of the model name. Thus the F-1 became the F-100, and this nomenclature continues to designate F-Series models to this day.

Though it's the F-Series pickups for which Ford is probably best known, the company has built a wide variety of vehicles over the years that fall under the category of "trucks." Besides the aforementioned medium- and heavy-duty haulers, Ford has produced cargo-oriented Panel and Sedan Delivery wagons, the innovative car/pickup Ranchero, full-size passenger and cargo vans, and the currently popular crop of minivans and SUVs. All play an important role in Ford's long history, and all can be found in Ford Truck Chronicle.

The beginning of Ford's second hundred years has been marked by new challenges and a host of new products to meet them, a cycle that has been repeated many times in its history. If the past is any indication, Ford Motor Company will fight its way back and continue to fulfill the dream that started it more than a century ago. We don't think Henry would want it any other way.

The links below will let you explore the world of Ford trucks. View dozens of photos and read about some of America's favorite trucks.