How the Ford Thunderbird Works 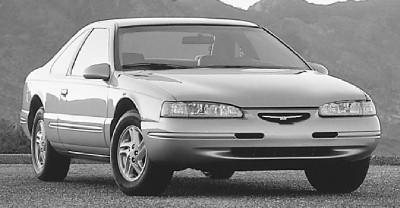 The 1997 Ford Thunderbird LX Coupe sold poorly, due in part to its aging design.

Expanding the 1992 Ford Thunderbird lineup was a revived Sport model. This time, it was a slightly detrimmed Super Coupe with the V-8 and narrower tires (but on unique alloy wheels). The price was attractive at $18,611, a good $3500 below that year's blown Thunderbird. All '92s wore full-width taillamps nestled under a reshaped "gullwing" trunklid, and both the Sport and LX ­adopted the Super Coupe's distinctive aero front-bumper and driving lamps as standard equipment.

Only the LX and Super Coupe returned for '93. The former lost a few standard frills to undercut the previous base model by over $500. It was all for sales, of course, and it worked, T-Bird model-year volume nearly doubling to over 133,000. To no one's surprise, the vast majority were LXs.

The Super Coupe was lowered a token $16 that year, which only underscored how good a value it was at $22,030 to start. But affordable luxury was now overwhelmingly preferred to high-tech potency, and the Super Coupe continued to decline as a percentage of total T-Bird sales.

The LX and Super Coupe looked nearly identical for 1994, when a timely freshening occurred, starting with a minor facelift announced by large oval cutouts in the front bumper. The dash was revised to contain a passenger air bag. Dual cupholders were added, too, but electronic gauges were deleted.

The big news was in the engine room. Internal changes boosted the blown V-6 to 230 bhp, a gain of 20, while the LX switched optional V-8s, ditching the pushrod 5.0-liter for Ford's new 4.6-liter "modular" unit with single overhead camshaft.

Reduced V-8 displacement implied reduced V-8 torque. Sure enough, the 4.6 made 10 fewer pound-feet than the 5.0, 265 in all, though it did bring a nominal gain of five horsepower. It did not, however, bring a noticeable improvement in smoothness or quietness, and performance was predictably little changed, Consumer Guide® clocking 0-60 mph in a decent 8.8 seconds.

Like the old V-8, the new one teamed exclusively with four-speed automatic, which gained an overdrive lockout button (to give better around-town performance at the driver's discretion) and electronic shift control. The latter was noticeable, but mostly in the negative, as it made some shifts slurred, others sharp, and both often tardy.

Despite such fumbles, Thunderbird output eased only a little for '94, dropping some 7000 units to just over 126,000. Continued aggressive pricing certainly helped stem the loss in a rougher-than-ever market where buyers often "cross-shopped" the T-Bird against luxury sedans.

In that light, the $22,240 Super Coupe looked an even better buy in luxury-performance, its base price having risen only $2400 over five model years. The LX was up to $16,830, less than $1900 higher than the less-well-equipped base model of 1990. Unfortunately, the basic '89 design was showing its age, and little was done to freshen it in '95. Sales continued to decline. Even new bumper fascias front and rear, headlamps, hood and taillamp clusters, and spark plugs guaranteed to last 100,000 miles couldn't spark much interest from the public.

If the picture was bleak in '96, it grew positively dismal when the '97 T-Birds were introduced. The only change of any consequence was the deletion of two gauges from the instrument panel. Rumors swirled through the industry that a new T-Bird was imminent, perhaps a smaller, lighter car with front-wheel drive. Such speculation certainly didn't help dealers shift their remaining '97s.

And then there were none -- except in NASCAR Winston Cup racing, where the Thunderbird had been Ford's warrior since the early 1980s. It remained so in '98, as teams were allowed to run '97-bodied cars for one last season while Ford developed a new racer. (It materialized as a two-door Taurus, a mythical beast with no showroom counterpart.)

As for the rumored front-drive T-Bird, the idea was apparently given serious consideration, said Ford insiders, but the car itself emerged for 1999 as a small new Mercury Cougar, a sporty front-drive coupe spinoff of the compact Ford Contour/Mercury Mystique sedans.

For more on the amazing Ford Thunderbird, old and new, see: