How the Ford SynUS Works 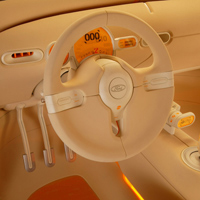 The SynUS cockpit features an amber-lit, easy-to-read instrument panel and ergonomic gauges. In the passenger compartment, riders can adjust the LED lighting from white to amber depending on their mood.

One of the most innovative and high-tech features of the SynUS is housed in the tailgate: a 45-inch, flat-screen, high-definition LCD monitor equipped with wireless networking. The massive Sharp monitor takes up the entire space where a back window would have gone. According to Ford, this is the biggest monitor to grace any passenger vehicle, concept or otherwise. With the monitor, passengers can surf the Internet (on a WiFi laptop), watch a movie, play a video game or keep tabs on the outside world via several cameras mounted outside the car. 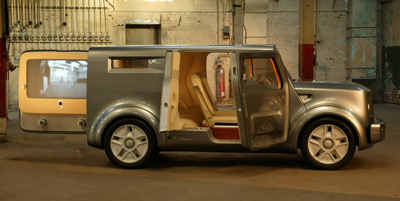 Occupants can even see what's going on outside while the protective shutters are closed. Thanks to the truck's high-tech surveillance system, the rearview mirror is no ordinary mirror. Instead of reflecting an image through the rear window (which the SynUS does not have), the "mirror" actually projects a high-definition, closed-circuit image of a camera's-eye view from behind the car.

The SynUS is just a concept car at this point. Ford has no plans to start production on it any time soon. The designers admit that the Brinks-truck design and exaggerated security features are over the top, but they were trying to prove that a small car could also be tough.

For more information on the Ford SynUS and related topics, check out the links on the next page.