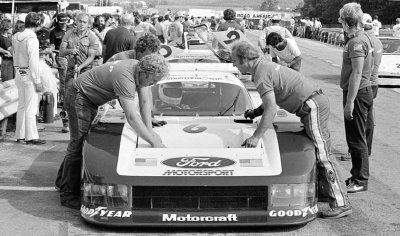 Ford SVO: Special Vehicle Operations was the source of some of the quickest and best-balanced American performance cars of the 1980s and '90s. Of course, high-speed machinery was nothing new to the Blue Oval gang.

"Race on Sunday, Sell on Monday" is a Detroit adage, and no one knew the truth of it better than Ford. Even before founding Ford Motor Company, old Henry made turn-of-the-century headlines driving stripped-down flyers like the "999" to record speeds.

Sixty years later, his grandson decided to pump up the company's image and sales with an all-out assault on most every major form of motorsports. This "Total Performance" initiative netted a pile of trophies and taught lessons that showed up in fast, flashy street cars like the Boss Mustangs. Indeed, many of those cars were in response to competition requirements, underscoring another industry truism: "Racing Improves the Breed."

By 1970, however, "Total Performance" was out of step with radically changed conditions, and Ford abruptly got out of racing. Over the next 10 years, fading public memory of the glory days and a procession of dull showroom models left the Blue Oval with a ho-hum image and sagging sales prospects.

For Henry Ford II, there was only one thing to do: Get back into racing. Thus, before stepping down as chairman in 1980, he personally authorized the formation of Special Vehicle Operations.

It was patterned on the small, hush-hush Lockheed "skunkworks" now famous for creating amazing aircraft such as the 3000-mph SR-71 Blackbird. Unlike "Total Performance" days, when outsiders like Carroll Shelby were typically recruited for specific projects, SVO was Ford's own "speed shop," with a separate budget and lots of freedom from top brass meddling.

Within a few months, a select group of some 30 designers, engineers, and experienced racing hands was assembled under German-born Michael Kranefuss (kranna-fus), the successful competition manager for Ford Europe in the early 1970s. Later dubbed "Rommel of the Racetrack" by Car and Driver, Kranefuss set the team to work on a variety of projects, many straightforward, a few very exotic.

The focus quickly turned to the racetrack, where Mustang buyers might identify with Mustang winners. But first, the SVO cars had to win. To find out if they did, go to the next page.

Despite the GTP's stunning horsepower, it was less reliable and less successful than rival Porsches and Corvettes.

Organized in the early 1980s, SVO, under team leader Michael Kranefuss, gave priority to road-racing Mustangs for the Sports Car Club of America (SCCA) Trans-Am and International Motor Sports Association (IMSA) GT series. This was partly because the public could easily link those racers with showroom Mustangs -- all the better for sales.

As Kranefuss explained to Motor Trend's Gary Witzenburg in 1984: "If you want to get your technical message across, where you're headed in the future, it's road racing more than anything else.... This is something that very clearly talks about the new Ford Motor Company, which is very much technologically oriented and dedicated to product integrity. It's a combined corporate effort, with some budget from Ford Design, some from Aerospace [division], and quite a bit from SVO to build the first four cars and about 15 engines."

Kranefuss was speaking of the new Mustang GTP prototype racer, for which Ford ponied up about $1 million in 1983 alone. A Mustang in name only, it had a long, low aerodynamic body. A very high-tech four-cylinder engine produced an astounding 600 horsepower in initial 1.7-liter form, around 700 when bumped to 2.1 liters for '84. Unfortunately for SVO, the GTP Mustang was outclassed by more-durable Porsches and Corvettes, though Ford did score one win in '83.

The 1985 production SVO made a midseason debut with thanks to a hotter cam, new exhaust system, higher boost turbo, and other "hot-rodding tricks."

Between 1984 and '89, Ford notched 46 Trans-Am victories, more than all other manufacturers combined. Driving talent helped, including Lyn St. James and especially Dorsey Schroeder, who won half the 14 Trans-Am events in 1989, a great way to celebrate Mustang's 25th birthday.

SVO was no less a less a power in other forms of motorsports, thanks to a talented team, the determined drive of Kranefuss, and deepening corporate pockets. C/D noted that in 1992, "Ford was the most diversely successful manufacturer in racing in the world. Ford drivers...finished 1-2-3 in NASCAR's final Winston Cup standings, and Ford broke a nine-year Chevrolet stranglehold on the NASCAR manufacturer's championship.

Out of the box, Ford's new turbo Cosworth engine dominated the Indycar series, overpower the long-dominant Chevy Indy V-8.... And Ford, while spending only half the money Honda and Renault poured into Formula 1, finished third in the Driving Championship." And that was just one year in the life of SVO. Too bad it missed the mark with its sole production car, the arguably too-European Mustang SVO. But nobody's perfect.

Though Ford remains a motorsports power, SVO was reorganized in the early Nineties and its street-machine charge handed to a new Special Vehicle Team. SVT generated all manner of Mustang Cobras and other hot Fords, setting the standard for whatever would next carry the flag at Dearborn's skunkworks.