Based on the chassis and suspension of the production Ford GT, the GR-1 (Group Racing 1) is a visual throwback to the 1964 Shelby Cobra Daytona Coupe, but it packs a modern punch with more than 600 horsepower.

In this article, we'll look beneath the GR-1's gleaming aluminum body, learn why Carroll Shelby makes some of the best cars in the world and find out if Ford could actually make a production GR-1 available to the public. 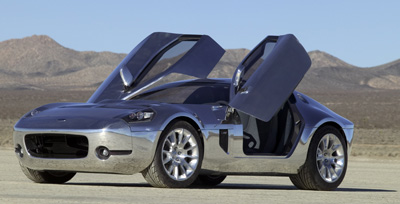 The GR-1 has much more than nostalgia and a pretty face going for it. An aluminum-block, 6.4-liter V10 engine is under the hood, cranking out 605 horsepower at 6,750 rpm and 501 lb-ft of torque at 5,500 rpm. That's enough power to hit 60 mph in under four seconds. Plus, the GR-1 accomplishes all this without turbocharging or supercharging.

The engine isn't mounted behind the driver's head the way it is in many high-performance cars. This is a more traditional front-engine design, created in part to fit the designer's idea for the car's shape. The transmission, a six-speed transaxle, is mounted in the rear to provide better weight distribution. This is another piece lifted directly from the GT.

The GR-1 also features a limited-slip differential and rear-wheel drive. An electronic limiter keeps the vehicle's top speed well under 200 mph -- a speed it could easily top if left unrestrained. 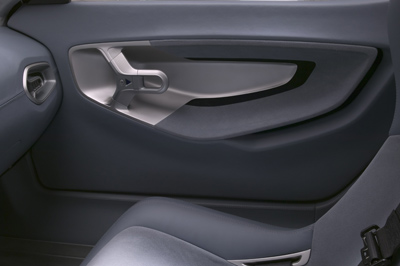 Climbing into the GR-1 through the forward-and-upward swinging butterfly doors, the interior reveals a race-ready design.

The seats are carbon shells equipped with racing-style harnesses. All the instruments in the panel behind the steering wheel are analogue, a sign of the GR-1's 1960s heritage.

A digital speedometer reveals the car's modern pedigree, however, and a closer look shows there is plenty of gadgetry in the dash. The stereo can play MP3s and can record and playback, ostensibly so drivers can record notes about the track while they take practice laps. Noise-dampening frequencies give the GR-1 a quiet street ride.

Mounted in the center of the dash is the Tire IQ display. Sensors in the tires and a built-in accelerometer measure tire temperature and pressure, as well as cornering and braking g-forces, all of which is relayed to the driver and passenger in real-time. 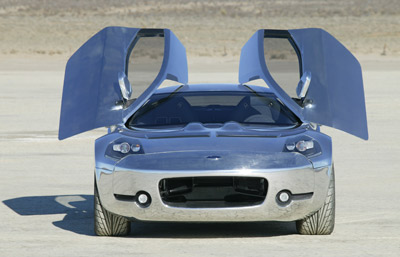 In many cases, cars are designed starting with the frame or the engine, and once the internal components are completed, the body is shaped around it. This is one reason so many of today's supercars look similar -- they tend to conform to the body shape required of a mid-engine-design, aerodynamically stable vehicle.

The Ford Shelby GR-1 is a supercar in a league of its own. The design for the car started with a single sketch by Ford designer George Saridakis. "George produced this completely resolved sketch, the best I've seen in 10 years," said J Mays, Ford Motor Company vice president of design. "This is a designer so masterful at visualizing every aspect of the car and its story that it literally flowed out of his pen." Ford also sidestepped another common aspect of supercar design -- high-technology. Yes, the GR-1 is modern, but it doesn't incorporate any experimental technologies in the mechanical systems. Instead, the car relies on Shelby's simpler vision of high-performance: putting a lot of high-quality parts in a well-designed car. It's still incredibly sophisticated and advanced, but with so much of the car coming from the Ford GT, the designers didn't have to go out on any limbs for the GR-1.

Like all concept cars, the GR-1's main goal in life is to lend prestige to the manufacturer. However, if the GR-1 goes into production, it could have a much livelier future. GR-1 stands for Group Racing 1, and that harkens back to the great Shelby cars of the 1960s, which dominated the American road racing circuit and gave Ferrari a serious challenge in the European series. It's possible we could see a GR-1 tearing up the Daytona track in the next few years.

Texan Carroll Shelby began racing in the 1950s after working as an aircraft-pilot trainer during WWII and then running a failed chicken business. His driving skill was noticed quickly, and he was soon driving for top race teams in the United States and Europe. In 1957, Sports Illustrated named him Driver of the Year.

In 1960, Shelby began to experience heart problems that eventually led to his retirement from racing later that year. In 1962, Shelby put a Ford engine in a roadster built by AC Cars of England. The name for that first car, the Cobra, came to him in a dream. Cobras would soon be winning races and championships in a variety of racing divisions around the world. In 1964, Shelby developed the Ford Mustang into an awe-inspiring racing machine, and the Ford-Shelby collaboration was solidified. 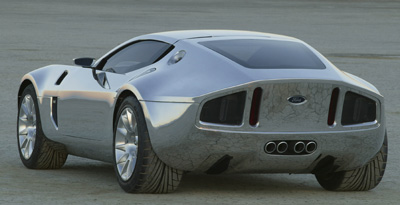 For more information on the Ford GR-1 and other concept cars, check out the links on the next page.

Could Electric Motor Conversions Save Classic Cars?
Ridiculous History: Ford GT40 Was Created Out of Spite to Beat Ferrari
How the Volvo Your Concept Car Works