Browse the article Was the Ford Edsel really that much of a failure? 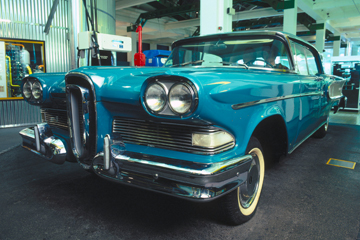 The Edsel was produced by the Ford Motor Company between 1957 and 1959 and was intended to fill the supposed gap between the Ford and Mercury lines.
(SSPL/Getty Images)

In a word, yes. Many consider it the biggest failure the Ford Motor Company has ever had. However, the car itself really wasn't all that bad. Sure, it wasn't conventionally attractive and Ford did make a few bizarre engineering decisions ... and, yes, there were some quality issues — but it was still drivable, which is something that people seem to forget when they reminisce about the awful, awful Edsel.

This car never had a chance, as it failed to gain traction immediately after its debut. Sales were even worse the following two years, until it was finally pulled off the market. Ford lost $350 million on the Edsel during those years, and it simply blamed the economy, which had taken a sharp turn for the worse just a few months before the car's debut, worrying consumers and leaving car dealers with a lot of excess inventory. The economy was one factor, sure, but there was much more than that.

So what was going on prior to the Edsel's launch in 1957? Well, Ford started with a good idea: a car that was slightly more upmarket than their current offerings, and the hope to capture and retain middle-class buyers rather than losing them to the competition. They spent millions on research. They wasted countless hours debating thousands of potential names, until the board chairman (in an effort to earn some brownie points), declared the car "Edsel" after Henry Ford's son. Meanwhile, the American public was told for months on end that Ford's new car would be the best thing to ever hit the road. The truth is, no car could have ever lived up to the hype that Ford and its ad agency managed to build up. Especially since no one outside the company had the chance to see what the car looked like, or even hear its awkward name, until right before the launch.

When the Edsel finally made it to the showroom floor, it was offered in 18 trims. Instead of being focused, Ford's attempt to woo everybody made the car seem confusing and poorly planned. And then there were those weird design decisions. The oval in the grille was initially intended to be a lot smaller, but the original version didn't allow enough airflow to actually cool the engine, so it just kept growing until it eventually took over the car's entire face. (Ford designers have said that it actually looked good, prior to all the revisions.) It used way too much fuel. There was a bizarre push-button transmission — innovative for no good reason. Design quirks then gave way to actual quality issues, like stuck trunk lids, peeling paint and even missing parts. As the story goes, the Edsel design was so counter-intuitive that assembly line workers simply stopped trying, and the car's reputation for being weird turned into a reputation for actually being bad. At one point, Ford dealerships tried to give away ponies in a contest to entice people to drive the Edsel. The winners instead opted for a cash prize, leaving Ford stuck with piles of poop — both figurative and literal. The Ford Edsel was killed off in 1959, but the marketing case study will last forever. Ford was its own worst enemy during every chapter of the Edsel story.