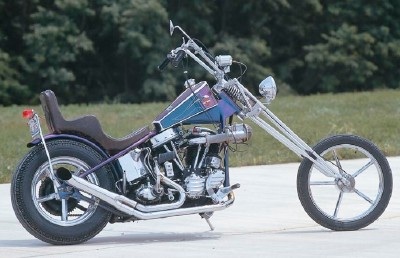 This FLH has been customized six times since 1969.

Aside from a cherry Early Chopper, what we see here is a study in perseverance; owner Jerry Morgan first customized this 1958 Harley-Davidson FLH in 1969, and has redone it five times since.

In 1971, after undergoing a second "build," the bike was wrecked almost beyond repair. But repair it Jerry did -- making it even better than it was before. And that's been the story with each overhaul that has brought it to this, its sixth incarnation.

By now, there is little left of the original 1958 Harley. The frame has been converted to a hardtail configuration, the forks exchanged for an extended girder setup. The engine, while still true to its Panhead design, has been modified for added power and durability; chief among its revisions are a Weber two-barrel carburetor and Alphabet headers. A custom-made fuel tank and classic Invader wheels substitute for the original pieces.

Most obvious among the alterations, however, is the contemporary "chameleon" paint, which looks purple, green, or a combination of both, depending on the angle of view. It represents one of the many improvements made to the bike since its first round of customization back in 1969. And while it appears to have finally reached perfection, one wonders if it's truly "finished."

Go to the next page for more photos and details of this Harley-Davidson-powered chopper, the FLH.For more information on custom choppers and motorcycles, see: 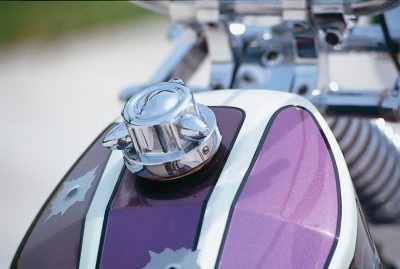 The FLH is a custom Harley-Davidson motorcycle customized six times by Jerry Morgan. Below are more pictures and details of this powerful chopper.

Fuel tank and frame wear modern “chameleon” paint that flops from green to purple when viewed from different angles.

The updated engine of the FLH chopper.

Harley-Davidson Panhead V-twin was given many updates, including an unusual two-barrel Weber carburetor conversion, with its long intake manifold and mesh air cleaner.

The alluring curves of the FLH's frame.

Note how the contours of the frame have been smoothed and molded to perfection.