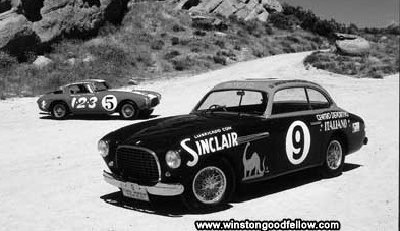 By the early 1960s, the Legend was well in place. Between 1953 and 1961, Ferrari sports-racing cars earned Maranello the Constructors World Sports Championship seven times. Mercedes-Benz and Aston Martin tied for second, with one title each.

It was a similar showing in Europe’s two most important road races, the glamorous 24 Hours of Le Mans in France and the punishing 1,000-mile trek through Italy, the Mille Miglia. Between 1949 and 1961, Ferraris won Le Mans five times, a record matched only by Jaguar. Between 1948 and 1957, Ferrari was victorious in the Mille Miglia eight times; next best was one win apiece for Mercedes, Lancia, and Alfa.

A large part of this success and the aura it generated was Enzo’s unwavering belief in the V-12 engine configuration.

“The main reason for the victories,” endurance ace Paul Frere noted in Ferrari 1947-1997, “was the superb 12-cylinder engine. [This] managed to cover up defects … such as the aerodynamics which would only let our Testa Rossa reach 260 km/h with difficulty on the straights at Le Mans. [A] few weeks after the race I asked Ferrari why he had not paid more attention to aerodynamics, he answered, ‘Dear Frere, aerodynamics are for people who don’t know how to build good engines!’ He always had a ready answer, just as he also had all the qualities necessary to win a place in both the history and the legend of racing.”

The V-12 did indeed dominate the early Ferrari engineering package; it wasn’t until the late 1950s that Enzo would begin to adopt the very latest chassis, suspension, brake, and gearbox technologies. When he did, Ferrari’s eye for talent, and the ability to exploit it, was beautifully illustrated in the hiring of three key engineers: Giotto Bizzarrini, Carlo Chiti, and Mauro Forghieri. It was they who brought greater sophistication to the balance of his cars’ components.

Bizzarrini came from Alfa Romeo in 1957, and had in his background a one-off Fiat Topolino modified for his graduating thesis at the University of Pisa in 1953. Bizzarrini recalled Ferrari telling him years later, “The reason I hired you is I respected your courage when I saw the car you were driving.”

What Bizzarrini said he appreciated about the Ferrari organization was its “very neat and clear division between the road and racing cars. Other companies such as Maserati often built them side by side, but in Ferrari, even in the competition department there was a division between Formula cars and sports cars.”

Thanks to Bizzarrini, Chiti also jumped from Alfa, and was soon made Ferrari’s technical director. “In practical terms,” Chiti recalled, “I spent my whole time with [Enzo]. In the evening we watched TV together. We talked about racing or discussed ideas. Racing was not the only conversation; I was struck by the breadth of his knowledge, his memory and above all, his intelligence.”

The after-hours time together may have been relaxing. Office hours were anything but. Chiti said he and his fellow engineers lived under a blanket of fear of making a mistake. Ferrari was unsparing of even the slightest error, something easily done in the yeasty environment of a continual stream of new projects.

The different talents of Bizzarrini and Chiti ended up having a great impact on Ferrari. Bizzarrini was a master of testing sports racers and GTs on the road, then modifying them. Chiti was fabulous on the drawing board.

“Ferrari’s feudal factory in Maranello continues to make the finest sports cars in the world,” Sports Car Illustrated observed in October 1960. “No other make or builder could even have tried to duplicate Ferrari’s utter sweep of … Le Mans, a race which can be dull, hard work but still proves the solid worth of an automobile. Ferrari and his men are still masters of their craft.”

In their time at Maranello, Bazzarrini, and Chiti played central roles in Ferrari’s four endurance crowns, two Formula 1 titles and in the greatly improving drivability of the road cars. That makes it all the more surprising the two talented engineers were let go in a house cleaning at the end of 1961, an episode that became know as The Ferrari Walkout or, The Purge.

Laura Ferrari with son Dino in the 1950s.

Near the center of the matter was Ferrari’s wife, Laura, whom he had married around 1920. Enzo’s “feudal” approach created an environment of intrigue, a situation further antagonized by Laura’s intrusive ways.

Chiti and another walkout participant, ex team manager Romolo Tavoni, recall her being a meddlesome presence inside the company. Chiti told author Oscar Orefici in Carlo Chiti: Sinfonia Ruggente that "she was a woman totally devoid of any diplomatic sense...(and) had none of the characteristics needed to live alongside a man of the stature of her husband."

The flashpoint was a physical altercation at the factory involving Ferrari’s powerful sales manager, Girolamo Gardini. Laura was viewed as the instigator. Loyalties were divided. Bizzarrini, Chiti, and a number of other department heads were ousted.

“A group of us tried to unify and support Gardini to have Ferrari bring him back,” Bizzarrini remembered, summing up for the several participants in The Purge interviewed by this author. “But Ferrari said ‘no’ and fired everybody!

“I was stunned to find myself on the outside of the organization, for Ferrari was like a second father for me when I was younger. He had faith in me and the team -- there was a complete feeling between us.”

Mauro Forghieri had been with the company only two years. But in another display of Enzo’s ability to pick talent and motivate it, he promoted the inexperienced, ambitious 27-year-old engineer to head the technical office.

“Ferrari made it very clear he was behind me 100 percent,” Forghieri remembered. “He said he would look after the politics and the money if I concentrated on the technical side. This gave me the courage I needed.

“He was a tremendous man and this gave me the chance to become what I always dreamed of. Ferrari was a great place to work during that period.”

Despite its success, Ferrari's golden years were still to come. Get the details on the next page.