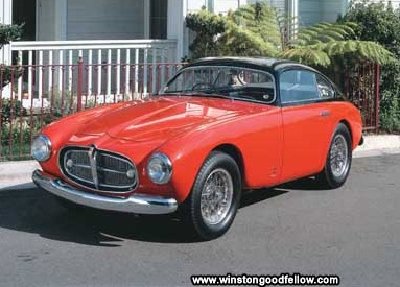 Ferrari’s sports-racing victories and the prestige they generated caused the industry’s top coachbuilding firms to clamor for his chassis. Many of Italy’s coachbuilders made it through World War II by dreaming about what they would design and produce once hostilities ended, but it took a few years for that creativity to come to the fore. Europe’s second half of the 1940s was ruled by a wartime mentality: Restraint and simply surviving were the keys to most everyone’s existence.

Recovery finally took hold in the early 1950s, and as the pace of material growth quickened into what became known as the “economic miracle,” the European spirit was rejuvenated, as well.

Automotive production grew exponentially, carrying along with it the gran-turismo and sports car industry and the coachbuilders who served it.

“It was like a giant, compressed spring; when the war ended, that spring released,” recalled Filippo Sapino, the designer of Ferrari’s 512S show car of 1970. Sergio Pininfarina expressed it this way: “Because people went a long time without walking, they took big steps, not little ones.”

Enzo Ferrari was acutely aware of how styling impacted his company and the industry. “It was a very, very important element for him,” Piero Ferrari said. “First was the engine performance, for he was an engine-oriented person. But second was the coachwork -- styling was very important.”

Couple that with Ferrari’s ever increasing reputation as the pinnacle of speed and prestige, and it’s easy to understand why coachbuilders clamored to show their work on a Ferrari chassis.

Touring dominated Ferrari’s designs from the debut of the 166 barchetta in 1948 to the end of 1950. Stablimenti Farina would show the occasional design, as would Milan’s Zagato and Sapino’s future employer, Carrozzeria Ghia.

But by 1951, the most prolific coachbuilder for Ferrari was Carrozzeria Vignale. Alfredo Vignale started his firm in 1946, and produced mostly nondescript shapes until he combined his talents with the era’s most formidable stylist, Giovanni Michelotti, then in his early 30s. “You could easily title his biography ‘Michelotti: An Artist,’” said a Michelotti coworker.

Vignale’s initial designs for Ferrari were restrained, but as 1951 turned to 1952, Michelotti’s creativity was unleashed. Whether it was an endurance racer, such as the 340 Mexico, or a luxurious gran turismo, such as a 212 Inter or 375 America, the shapes were superb and startling in their originality.

Still, it was another coachbuilder who truly bewitched Ferrari. By the early 1950s, Battista “Pinin” Farina and his firm were the masters of the styling universe, their only rival being Anderloni and Carrozzeria Touring. Pinin Farina’s seminal 202 Cisitalia berlinetta of 1947 opened a new age of design.

“My father was very intuitive,” Sergio Pininfarina remembered. “He believed Ferrari would one day become the most important name in Italy, much like Alfa Romeo prior to the war. This made him want to go to Ferrari. At the same time, Mr. Ferrari wanted to work with Pinin Farina because, in his mind, he thought Pinin Farina was the best.”

Though the two men had known one another since the early 1920s, they admired the other’s work from afar. “Both were prima donnas,” Sergio Pininfarina explained with a chuckle. “Ferrari was a man of very strong character, and my father was much the same. Mr. Ferrari was not coming to Pinin Farina, and my father was not going to Modena. So they met halfway, in Tortona, something like Gorbachev and Reagan agreeing to meet in Iceland.”

Their luncheon in Tortona altered the Ferrari universe. By 1954, it was clear who was Ferrari’s favored coachbuilder. Be it a gran turismo built in limited quantities, an endurance racer, a sensational show car, or a one-off for royalty, Battista and Sergio Pininfarina’s work showed extraordinary creativity, refinement, and grace.

In describing his philosophy years later, Battista’s passion for timeless form was obvious. “The inter-relation between the body of a beautiful woman and that of a Farina designed car,” he said, “is that both have a simplicity and harmony of line, so that when they are old one can still see how beautiful they were when they were young.”

The humble Modenese artisan had worked on Ferrari’s Alfa Romeos prior to the war. He founded Carrozzeria Scaglietti in 1951, in a building not far from the growing Ferrari works in Maranello.

Scaglietti’s initial efforts on Ferrari chassis consisted of rebodies for customers. The quality of the work caught Enzo’s attention, and by 1955, Scaglietti was building the majority of Ferrari’s competition cars.

That began a close relationship between the two men that lasted until Enzo’s death in 1988. Central to the bond was that Scaglietti’s carrozzeria had become a second home to Ferrari’s son, Dino. Named after Enzo’s father, Alfredo, and shortened to the affectionate Dino, Enzo’s first son was in his early 20s as the ’50s dawned, and was suffering from muscular dystrophy.

“Every day [Dino] would drive over to our workshop to see how things were going,” Scaglietti remembered. “He was actively interested, saying ‘We can do this, we can do that.’ These visits were his main link to his father’s cars.

“But you could tell he was not well. Often, he fell and then pretended like he tripped on a hammer or something else lying on the shop’s floor ... ”

Dino had followed his father into the family business and had showed early promise as an engineer. His death in 1956 cast a pall over Enzo’s world. He preserved Dino’s desk as a memorial, visited his grave daily for many years, and wore only black neckties in his honor.

“[T]he only perfect love in this world is that of a father for his son,” Enzo wrote in his autobiography six years after Dino’s death.

Ferrari also forever remembered the comfort Dino found in Scaglietti’s presence. By the late 1950s, Scaglietti was part of Enzo’s inner circle. Europe’s economic miracle had treated both men well. Ferrari production had increased nearly 1,000 percent since 1950, and Scaglietti, as one of Ferrari’s key subcontractors, had benefited greatly.

The coachbuilder was ready to break out and form his own company.

“I needed money to make my own factory,” he remembered. “Because I did not have the funds to underwrite the expansion, Ferrari called his banker and cosigned the loan for me when I bought the land. Without that type of generosity, I wouldn’t have been able to do what I wanted to do.”

By the early 1960s, Ferrari had established its legendary status. Find out more about this Ferrari era on the next page.