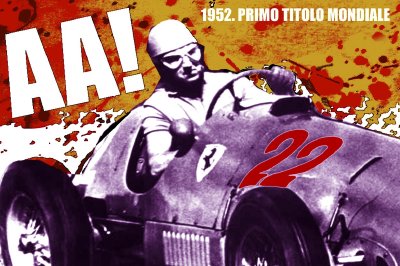 By the early 1950s, Ferrari was constructing a car every 10 days to two weeks. A string of endurance-racing victories at the hands of factory drivers and privateers were fueling orders for the road cars. Many found their way to the racetrack, often driven by wealthy sportsmen and privateers, such as Italy’s Marzotto brothers.

“I met Enzo Ferrari in 1949,” Paolo Marzotto recalled in Ferrari 1947-1997. “Vittorio, Umberto, Giannino and myself had gone to Modena, to the firm’s old headquarters. That is where the ‘Commendatore’ met customers. Maranello only housed the workshops.

“We had gone to buy a couple of cars and to ask to drive another two for the Scuderia in the Italian Sport Championship the following year ... [W]ith his subtle astounding eloquence, [Ferrari] convinced us to buy four cars.

“And if we wanted the official cars, we just had to earn them. There was something innovative about Ferraris that other cars did not have, and the man who created them was extraordinary: pleasant, curious, biting, overpowering, and conciliatory. He exploited every opportunity with a mixture of managerial skills and missionary zeal ... ”

Ferrari was now competing in Grand Prix racing as well. The origins of open-wheel competition traced to 1906, and in the late 1940s, international racing’s organizing body, the Paris-based Federation Internationale de l’Automobile (FIA), began planning for an annual world-championship competition for drivers. The first Formula 1 Grand Prix was held at Great Britain’s historic Silverstone course on May 13, 1950.

Ferrari began building and competing in open-wheel racing in 1948, and entered the Grand Prix fray in 1950’s second race, in Monaco on May 21. Since then, a Ferrari car has competed in every Formula 1 race.

The following year was a different story. Ferrari handed Alfa its first postwar defeat, at Silverstone in July, and narrowly lost 1951’s championship to Alfa in the season’s last race in Spain. As if recognizing the handwriting on the wall, Alfa withdrew from Grand Prix competition.

Alfa’s Silverstone defeat and its eventual withdrawal was bittersweet for Ferrari. “I still feel for our Alfa the adolescent tenderness of first love, the immaculate affection for the mamma,” Enzo wrote in a letter to Alfa’s managing director after beating his onetime employer.

Ferrari dominated Grand Prix racing in 1952 and ’53, losing only one race and easily winning the championships both years. But even more important to the forming Ferrari legend was its success in sports-car competition, in the epic endurance races of the day in particular.

Indeed, in the world’s most-famous long-distance road races -- Le Mans, the Mille Miglia, the Carrera Panamericana, Sebring -- Ferrari’s sports cars were more often victorious than not. A number of these racing-winning models could be ordered as grand-touring cars, equipped with less-powerful engines and more-luxurious interiors, but with coachwork often identical to that of the race winners. This was quite a lure for customers, and it helped create an aura around the man and his company with the era’s top race drivers.

“When I first met [Ferrari] he was 55 and I was 25,” remembered Umberto Maglioli, winner of 1954’s Carrera Panamericana in a Ferrari 375 Plus. “A good-looking big man, his hair was nearly all white, already a legend,” Maglioli wrote in Ferrari 1947-1997. “You approached him with reverential fear, influenced because you saw everyone else treating him with great deference, careful not to irritate him, and there were no two sides about it. He lorded it over everybody, made his own rules, good and bad.”

Enzo’s reverence for the machinery was evident to Maglioli. “‘We are car builders,' he would say. It was an extreme attitude ... But Ferrari was like that. He felt real displeasure when one of his cars had an accident, to the point that he didn’t want to see pieces of it when it returned to the plant. That is one aspect of Ferrari’s character that has possibly not been sufficiently emphasized.”

Maglioli’s observation underscored the fact that Ferrari’s relationship with the men who risked their lives in his racecars was a complex one.

“At the end of 1955 I had the possibility of retiring,” wrote the great Fangio in Ferrari, The Grand Prix Cars, “[but] decided to postpone my retirement for another year. As Mercedes-Benz had withdrawn, I returned to Europe to race with Ferrari in 1956, but I wasn’t very happy about it.

“Since I first raced in Europe I had always been in a team opposing Ferrari. Now I was joining them … but he would never say who [was] the number-one driver, although the younger men told me ‘Juan, you are the leader.’

“Ferrari was a hard man. His team raced in every category and his drivers drove always for him. He wanted victory primarily for his cars and this suited my attitude, because I never raced solely for myself, but the team as a whole.

“But a driver must have a good relationship with his mechanics, and I found this rather difficult to achieve with the Ferrari team. I suppose it was because I had been their opposition for so many years and now here I was as their driver.”

Not surprisingly, coachbuilders lept at the chance to design a Ferrari chassis. On the next page, find out which coachbuilders earned the right to do so.