Ferrari the Marketer and Motivator 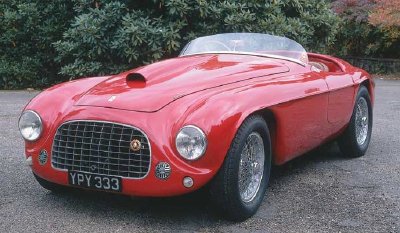 Ferrari built one more car in 1947, modifying the coachwork and engine of each of his three machines as needed. By August, the V-12’s displacement had increased to 1902cc and the model designation evolved to 159. By early 1948, Ferrari was making the 166 with its 1996cc capacity; it became the company’s mainstay.

The 166 won more races than the 125 or 159, but Ferrari soon recognized he had a problem. His cars had a variety of bodies, from slab-sided torpedo shapes to cycle-fender jobs to a coupe and spider made by Carrozzeria Allemano in Turin. The Allemano coupe won 1948’s Mille Miglia, but its look was completely different from any of its predecessors. This greatly troubled Ferrari’s marketing instincts -- how could one identify the car as “a Ferrari”?

Enzo turned to Felice Bianchi Anderloni of Touring for the solution. His talented friend gladly accepted the commission. But shortly after the project started, Anderloni became ill and died after a trip to Rome; this thrust his son Carlo into the position of design director.

Carlo Felice Bianchi Anderloni, 32 years of age, had been working full-time in the company for five years, but still felt the pressure of his new circumstance. “It was not an easy position to be in,” he reflected. “We have a saying in Italy that it is best to present a good face in a bad situation, and that is what I tried to do.

“This was my first work and it was vitally important because people understood that Touring meant my father. I knew many were quietly wondering ‘what will happen now? Can the son follow in his father’s footsteps?’”

Enzo Ferrari had no such doubts, and let Anderloni know he had his full confidence. Carlo bit into the project with vigor, richly rewarding Ferrari’s belief when Touring’s 166 MM “barchetta” made its debut at the 1948 Turin Auto Show in September.

One of the postwar period’s seminal designs, the Barchetta won the Mille Miglia and the Le Mans 24 Hours in 1949. Those victories and others formed the foundation for Touring’s design and construction of a series of berlinetta and coupe 166s. All used the same design language, and Ferrari had its first “look.”

The touring emblem of the Ferrari 166 MM.

As orders increased, Anderloni got a firsthand taste of Enzo’s character and motivational techniques. One day, Ferrari took a rare trip to Milan to examine barchettas under construction for the Mille Miglia. Shortly after his arrival, he launched into a screaming tirade. The work was unsatisfactory. It was moving too slowly. He might cancel his order. Enzo stormed out of the Touring works and drove back to Modena.

Stunned, Anderloni remembered looking at Touring co-owner Gaetano Ponzoni, who handled the administrative side of the company. After the shock of the episode wore off, the two retired to the administrative offices to come up with a game plan: Carlo would drive down and see Ferrari the following day in Modena, no short order given the disarray of Italy’s postwar infrastructure.

The trip was arduous, and Anderloni arrived at Enzo’s factory late in the morning. He was immediately escorted into Ferrari’s office and invited to sit down. “What brings you here?” Ferrari asked. “This is a wonderful surprise.”

“Yesterday’s blowup had us a bit distressed,” Anderloni replied. “What can we do to help the situation?”

“Yesterday?” Ferrari responded, dismissing the entire episode with a wave of the hand and shrug of the shoulders. “Shall we go get an early lunch?”

Impressive racing victories in the early 1950s resulted in an increase in Ferrari orders. Continue reading to learn more about this era.