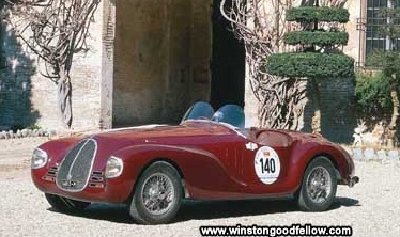 Ferrari's “It” factor and years of success weren’t enough to prevent an acrimonious divorce with Alfa Romeo in January 1938. Things likely began their downhill slide in the summer of 1936, when Jano resigned after Alfa managing director Ugo Gobbato hired Wifredo Ricart, the talented Spanish engineer. Ferrari and Gobbato had an immediate clash of personalities, a dislike fueled by their different engineering opinions.

Gobbato was also antagonizing the situation. Backed by the German government, the racing programs of Mercedes-Benz and Auto Union were an unstoppable tidal wave. Their chain of victories was a disaster for Alfa and other competitors.

With corporate and national pride at stake, Gobbato desired to have “everything planned in advance, down to the last detail,” Ferrari noted in his memoirs. But Enzo believed the best way to create and campaign a racing car was with a small group working under a flexible management style that allowed it to respond quickly.

“Not many agreed with me and there were times Jano and I and the drivers found ourselves muttering together like conspirators in the Alfa Romeo yard,” he remembered. “In the end I was sacked, which seemed to be the only logical solution to the situation that had developed.”

As a condition of the split, Ferrari signed an agreement that said he could not build a car under his own name for four years. But with ambition burning in his heart and cash doing the same in his pocket, he quickly formed a new company, Auto Avio Costruzioni. AAC remained in the same downtown Modena location as the Scuderia, and to make his new car, Enzo soon hired well-known technicians Luigi Bazzi and Federico Giberti, and engineers Vittorio Bellentani and Gioachino Colombo.

Ferrari then put in charge of the project Alberto Massimino, a talented 45-year-old engineer who had moved to Modena to work on the Alfa 158 racecar. Increasing border tensions throughout Europe were causing severe materials shortages, so Ferrari had his men use a Fiat 508 C as their starting point. Fiat had made a handful of these mainstream sedans into endurance racers, so Ferrari’s team reinforced the chassis but left untouched the brakes, transmission, steering, and front suspension.

No so the engine. They took two 508 C 1100cc four-cylinder engines, reduced the bore and stroke, cast a new block and cylinder heads, and joined the two engines together. The result was an inline 1496cc 8-cylinder that produced 72 horsepower at 5500 rpm.

For the car’s body, Ferrari turned to Felice Bianchi Anderloni, the design head of Italy’s preeminent coachbuilder, Carrozzeria Touring. Ferrari had admired Anderloni’s work on a plethora of competition and street Alfa Romeos over the previous decade.

Felice’s son, Carlo Biachi Anderloini, was then a 23-year-old cadet in the military, and thanks to his photographic memory, well recalled his father speaking of Enzo’s visit to Touring.

“He said Ferrari wanted something that could be recognized as a Ferrari at a glance,” the younger Anderloni remembered, not aware at the time that he would hear the exact words a decade later. “Ferrari was obviously thinking of some type of production, for he wanted his car to have a touch of luxury.”

Felice Anderloni made some initial sketches, then refined them through use of his “visualizers,” men who turned his initial drawings and ideas into detailed renderings. A 1:10-scale model was then constructed and analyzed in a wind tunnel.

The first 815 (8-cylinders, 1.5-liters) underwent tests on public roads. Carlo Anderloni said Touring’s favorite stretches were between Milan and Como and between Milan and Bergamo. “The car was covered in felt strips,” he said, “then followed by a second car with a photographer onboard who took pictures. Once the photos were developed, my father looked at the felt strips to analyze the airflow.”

Two 815s were built and entered in 1940’s Gran Premio Brescia della Mille Miglia, a one-time substitute for the traditional Mille Miglia. They were valiant competitors. One dominated its class and ran as high as 10th overall late in the race. Both had to retire with mechanical failures, causing Ferrari to note a bit harshly, “The experiment that started so brilliantly ended in failure, largely because the car had been built too hastily.”

The 815s were the last cars Ferrari would work on for years. Italy officially entered World War II on June 10, 1940, when a general order to proceed to local Fascist headquarters swept the country. Ferrari survived the conflict by producing oil-driven grinding machines and machine tools.

Two years into the war, the government issued an order for Italy’s industries to decentralize. Ferrari moved the Auto Avio Costruzioni works from Modena to Maranello, a rural suburb some 10 miles to the south, where he already owned a parcel of land.

According to then-Ferrari employee Girolamo Gardini, the move happened on July 26, 1943. By September, the company was once again at work, and its labor force increased to 140 from 40 over the following two years.

Allied bombs twice hit the factory, the second raid badly damaging the facility. But these proved only temporary setbacks. “I was not unprepared for the end of the war,” Ferrari noted in his memoirs. Indeed, his passion for cars and competition was evident by the two 815s illustrated at the top of AAC’s wartime sales brochures.

After the war, Ferrari wasted no time creating a new engine configuration he had in mind for years. Get the details on the next page.