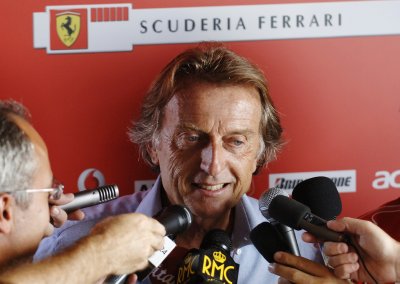 After Ferrari’s death in 1988, the Fiat-controlling Angelli family added another 40 percent to its 50-percent share of Ferrari; Piero Ferrari retained 10 percent.

In the half-decade that followed, the Ferrari company seemed to live on Enzo’s legacy, with no definitive voice to set it on track. Alain Prost narrowly missed winning the F1 championship in 1990, then the team fell considerably off the pace.

The road cars also suffered. By the early 1990s, Ferraris no longer were regular winners of magazine comparison tests. Quality control suffered. Rocked by worldwide recession, sales plummeted, from nearly 4,600 in 1991 to less than half that in 1993.

Fortunately, Ferrari’s management hadn’t been deceived by those lofty late-’80s sales figures and had brought in a new captain for the ship. In late 1991, Luca Cordero di Montezemolo was named Ferrari president and CEO. He was a man with a mission.

“I had just bought a 348 with my own money,” he recalled 10 years after his hiring, “and, with the exception of its good looks, I was utterly disappointed.”

Charismatic and focused, Montezemolo transformed the company in many ways. Under his leadership, one outstanding model after another left the gates of Maranello: the 355, 360 and 430, the 550 Maranello and Enzo, to name a few.

Montezemolo set about righting the Formula 1 effort, triggering the Schumacher era of utter domination. He also orchestrated the 1999 purchase of Maserati from Fiat and the turnaround of that former crosstown rival.

Ferrari was most certainly back, and it wasn’t just sales numbers and F1 titles that proved it. When debt-laden Fiat sold 34 percent of its Ferrari holdings to several banks in 2002 for approximately $700 million, it established the worth of Ferrari/Maserati at approximately $2.1 billion, or about one-third that of Fiat.

At the time, combined Ferrari and Maserati annual production was around 8,000 cars. Fiat manufactured approximately 1.7 million vehicles per year.

But Montezemolo’s vision extended beyond what the public saw on the roads and at the racetrack. He wanted to create an entirely new working environment, one that, as Ferrari literature expressed it, “put people at the center of innovation.”

The firm began using architecture as a source of brand identity, starting with the Renzo Piano-designed avant-garde wind tunnel that opened in 1998. Then came a new machining department, a paint shop that bordered on science fiction in its operation, a product-development center, and other structures.

Fabulous together, each also created a unique environment on its own. The engine assembly plant, for example, was quiet, well-lit and had several atriums inside, all in the effort to create an ideal working environment.

Profitable Ferrari not only poured money into its own facility, it did the same for Maserati. The Maserati factory was fully renovated, the product line revamped. Maserati became a highly attractive holding, and in February 2005 was repurchased by Fiat, which merged it with Alfa Romeo. Ferrari once again would concentrate on its own fortunes.

If Enzo could see what had become of his factory and of Maranello, he would recognize neither. No longer a sleepy country village, Maranello had assumed an air of sophistication. It daily attracted visitors from around the world. The factory it housed was truly a small city, with roads, intersections and signposts listing street names to guide guests. Inside those hallowed gates, the past blended beautifully with the present, a new entrance on the eastern side of the factory as impressive as the historic gate on the west.

“When I look at where Ferrari is today,” Piero Ferrari observed in 2005, “neither my father nor myself could ever imagine anything so big. It was really just a family business. Now Ferrari is a large company, an industry. The dimensions of everything are so very different.”

Leading the charge were two enticing new models: a Spider version of the exciting F430 and the 612 Scaglietti, a four-seat front-engine V-12 grand turismo to replace the 456, introduced to Europe in late 2004.

In addition, Ferrari earned a smashing $200 million for calendar 2005 on consolidated earnings of some $1.67 billion, of which 17 percent was earmarked for research/development and investments.

These improved results partly reflected a “divorce” from Maserati, whose losses had been a drain on Maranello’s coffers. (Even so, and despite its new pairing with Alfa, Maserati will continue to look to Ferrari for components and technical assistance.)

The 2006 picture was even rosier. Road-car sales increased to a record 5,671, and profit improved to some $238 million on turnover of approximately $1.88 billion. Year-end employment was listed at 2,870. Notwithstanding Piero’s characterization, Ferrari remained very small automaker by world standards, though certainly never more prosperous or multifaceted.

By now, Ferrari was not only a source of pride for parent Fiat but an important profit center. As if to underscore this, Fiat increased its Ferrari stake to 85 percent, through a buyback of outstanding shares.

Ferrari welcomed a new CEO, Jean Todt, in 2006. In the next section, read about his ambitious plans for Ferrari's future.