Enzo Ferrari and the Twilight Years 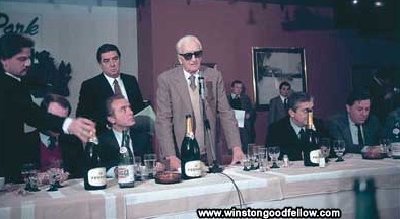 Enzo Ferrari speaking to journalists at a company luncheon in 1981.

“It quickly became clear The Old Man still had the ‘It’ factor,” Goodfellow wrote. “Though tables had been set hours earlier and doors were open, we all milled around in the restaurant parking lot until a light-blue Fiat sedan pulled up. It stopped, the rear door opened, and out popped Ferrari, the trademark dark glasses and light-colored raincoat in place. He looked around as several employees pulled out cameras for pictures and, after a moment’s hesitation, walked into the restaurant.

“It was as if the Red Sea parted, all of us following in his wake,” Goodfellow wrote. “When Ferrari spoke during the lunch, the room was quiet, all gripped by his words. Even when he wasn’t speaking or eating but just staring off into space, one could easily sense his mind’s wheels turning at full speed.

“After lunch, a group of us went over to the factory, shut down for the occasion,” Goodfellow continued. “We walked the silent production lines, then visited the racing department. A few moments later, Ferrari F1 team driver Didier Pironi came in and, while admiring the new car for the upcoming season, handed me a body panel. This was in the early years of composite materials, and much to my amazement, I easily waved a large section of the car in the air above my head.”

In the showrooms, it was another story. Even the second oil crisis didn’t slow road-car sales, and production topped 3,000 for the first time in 1985.

The go-go mid ’80s also saw a Ferrari spawn a new phenomenon: the instant collectible market. Intended to return Ferrari to sports-racing competition, the limited-production 288 GTO was snapped up by a rapacious breed of investors and speculators who resold production cars for considerably more than their sticker price.

In the summer of 1987, journalists assembled in Maranello for the introduction of the F40, created to celebrate the company’s 40th anniversary.

“A little more than a year ago,” Enzo told the gathering, “I expressed a wish to my engineers: Build a car to be the best in the world. And now that car is here.”

With that, a red cover was swept aside, revealing Ferrari’s first road car with a claimed top speed of more than 200 mph. The journalists broke into spontaneous applause. Ferrari production topped 4,000 for the first time in 1988. And by 1990, F40s were going for more than $1 million in the frothy secondary market.

The F40 was the last Ferrari produced on Enzo’s watch. In failing health as he reached 90, Ferrari died in August 1988, of kidney failure. At his side were his surviving son, Piero, and Piero’s mother, Lina Lardi.

In all respects, Enzo was a man of his time and of his station in life. Lina Lardi was his long-time inamorata, and only after the death of his wife, Laura, in 1978, did Ferrari include Piero in his public life. Presented as Piero Lardi Ferrari, he would become an integral part of the company management team.

“You really can’t compare anyone to Enzo Ferrari,” said Brenda Vernor in 1995. Vernor had spent years as Enzo’s personal assistant and had worked closely with a number of Ferrari F1 bosses for almost three decades.

“Ferrari was a strong man -- and a weak man.” Vernor said. “He never showed his feelings. But he was a very human person because he had come from nothing, and he knew what it was like to be an ordinary mechanic who had problems and needed things.

“If any of his mechanics in the racing department -- or anybody, for that matter -- had a problem with a doctor or needed a specialist, they would go to The Old Man and he would pick up the phone and make an appointment. He really did have a knack for getting the most out of the people who worked for him.

“He had a very good sense of humor and would always notice things,” Vernor continued. “Even if he didn’t say, he saw everything. He may not have let you know, but I reckon if you went to him the day after and asked ‘What was Brenda wearing yesterday?’ he would have been able to tell you.

“There will never be another man like him. What you must realize is … for us Enzo Ferrari is still alive, because when you speak of Ferrari you don’t think of Fiat, you think of him.”

What became of Ferrari after the death of its enigmatic founding father? Continue reading to find out.