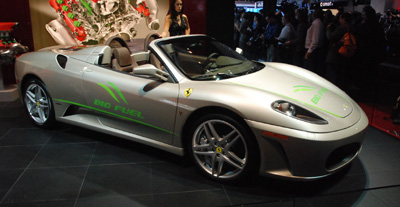 Even exotic-car builders are turning green. Looking to do its bit for the environment, Italian sports-car maker Ferrari rolled out an E85-capable version of its F430 Spider at the 2008 Detroit Auto Show.

The F430 Bio Fuel Concept differs little from Ferrari's production F430 Spider, except that its fuel system has been redesigned to handle E85 fuel (a gasoline/ethanol blend that can contain up to 85 percent ethanol alcohol) and the engine retuned to capitalize on the fuel's higher octane. Like most E85-compatible vehicles, the Bio Fuel Concept is designed to run on straight gasoline, E85, or any ratio of gas and ethanol in between. 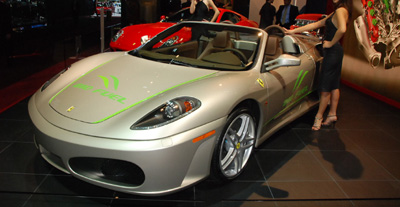 Ferrari claims that when running on E85, the Bio Fuel Concept's 4.3-liter V8 is good for 500 horsepower, a bump of 10 over the standard-production F430, while CO2 emissions have been reduced five percent.

Ferrari didn't project fuel-economy performance for the Bio Fuel Concept, but observed fuel consumption is generally 25 to 35 percent higher for vehicles running on E85 instead of gasoline.

According to Ferrari, there are no immediate production plans for the Bio Fuel Concept, but the vehicle could quickly be brought to market should demand warrant.