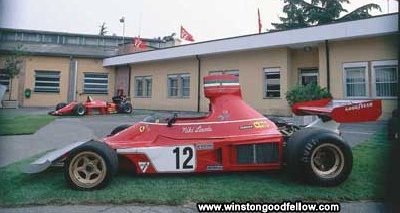 Ferrari’s drought in Formula 1 continued well into the 1970s, relieved only briefly by a second-place showing in the 1970 constructors championship. Its F1 car that season was the innovative 312 B, which had a semistress-bearing flat-12 engine; it won four races.

A burr under Maranello’s saddle that season -- since 1967, in fact -- was the Ford DFV V-8. Built by Cosworth and financed by Ford Motor Company, this stupendous engine won its very first time out at Zandfoort, in a Lotus, and would soon spread to most every other team.

In 1974, the tide began to turn. Ferrari withdrew from endurance sports-car racing to concentrate its resources on Formula 1. It hired Austrian Niki Lauda, late of BRM, as its No. 1 racing driver. Chief engineer Mauro Forghieri returned after a one-year absence. And Luca Cordero di Montezemolo became team manager and was a tremendously equalizing force, eradicating much of the political intrigue that hounded the team.

With the last of the 312 Bs, the 312 B3, Lauda won the Spanish and Dutch Grands Prix, teammate Clay Regazzoni won in Germany, and Ferrari finished second to McLaren-Ford in the constructors championship

For 1975, Ferrari introduced the Ferrari 312 T Series. The “T” stood for transversale and indicated that the five-speed gearbox was mounted east-west ahead of the rear axle for a better center of gravity. The suspension was altered front and rear, and Lauda’s superb ability as a test driver honed the machine.

The Ferrari 312 T entered competition in the season’s third race, in South Africa. By the sixth race, at Monaco, it and Lauda were in the winner’s circle. In all, the Ferrari 312 T won six of the last 11 races. Lauda was world champion, and Ferrari had its first constructors title since 1964.

Ferrari and Lauda appeared well on their way to a repeat in 1976, with the 312 T2. Underneath, the car was nearly identical to the 312 T. But the body was quite different, with higher side panels and different wings and spoilers. With Lauda and Regazzoni, the 312 T2 won five of the year’s first eight races.

Then, in the German Grand Prix at Nurburgring, Lauda had a horrendous, life-threatening crash. He was pulled from his flaming 312 T2 by four fellow drivers and a track marshal; a priest read him the last rites in the hospital.

Miraculously, Lauda recovered, and incredibly, was back in a 312 T2 five weeks later for the Italian Grand Prix. He finished fourth. Ferrari accumulated enough points to repeat as constructor champion. Lauda withdrew from the season’s last race, in Japan, because of appalling, monsoonlike conditions, and lost the driver’s championship by one point to McLaren-Ford’s James Hunt.

The 312 T2 returned in 1977, and Lauda’s loss of the driving championship in 1976 seemed a fluke. He and teammate Carlos Reutemann consistently scored points, often placing on the podium. Ferrari handily won the constructors crown, and Lauda had his second driver’s title.

Nonetheless, the season was dogged with controversy. Animosity between Lauda and the team over a number of incidents during the 1976 campaign caused the World Champion to leave Ferrari at the end of the 1977 season. (Lauda and Enzo Ferrari patched up their disagreements years later.)

Ferrari’s mount in 1978 was the 312 T3, which showed important differences from the T2 in aerodynamics and front suspension. It was introduced at the South African Grand Prix, the season’s third race. Carlos Reutemann won with it in the fourth race, the U.S. Grand Prix West, at Long Beach, California. He won two more races in the car, and Gilles Villeneuve won one as Ferrari placed second to Lotus-Ford in the constructors championship.

In 1979, Ferrari brought in as its No. 1 driver Jody Scheckter, who had driven for Wolf-Ford the previous season. The South African and the Canadian Villeneuve proved the consummate GP tag team.

“We weren’t just teammates,” Scheckter recalled in Ferrari 1947-1997, “we were friends and wanted to work together to win races, so we made an agreement to share all our technical information.”

The arrangement worked quite well, indeed. The duo finished 1-2 in the debut of Ferrari’s new car, the 312 T4, in South Africa for the season’s third race. The T4 represented Ferrari’s transition from mere areo design to true ground effects, in which the car’s structure and shape managed airflow along the sides and underbody to generate maximum adhesion.

Each the winner of three races, Scheckter was World Champion, Villeneuve was runner-up, and Ferrari handily won the makes title, its fourth in five years.

The next season saw the final development of the 312 series, the 312 T5. Bodywork was once again modified, but the rapidly changing science of ground effects had moved beyond what Ferrari could do with its flat-12 engine, a powerplant that was wider and thus more difficult to package in terms of airflow management than the Ford-Cosworth V-8 that powered Alan Jones and his Williams-Ford to the championship.

The 312 T5’s best showings were fifth-place finishes at Long Beach, Monaco, and Canada. Ferrari was famous for its 12-cylinder engines, but the close of the 1980 season marked a period of nine years before one of its F1 cars would again be powered by a twelve.