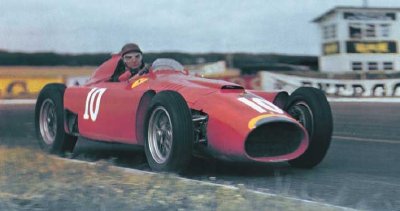 In 1954, the Grand Prix world championship ended its two-year hiatus under Formula 2 rules and was reconstituted under revised Formula 1 regulations. Now, engine capacity was limited to 2.5-liters naturally aspirated or 750cc supercharged.

Like most competitors, Ferrari went the naturally aspirated route. He continued use of Lampredi-designed four-cylinder engines in an update of his 553 F2 machines called the 553 F1. (The 533 F1’s generous midsection reminded some of a shark’s torso, and the car was nicknamed “Squalo.”)

But there were two thorns in Ferrari’s side that season. First, the 250 F from crosstown rival Maserati was a masterfully balanced machine, and it won the year’s first two races. Then Mercedes-Benz entered F1 in the season’s fourth race, and thereafter dominated the proceedings, winning the championship behind the driving of Juan Manuel Fangio.

At 1954’s last race, in Spain, Lancia entered the fray. The Turin automaker’s innovative Vittorio Jano-designed Ferrari D50 showed considerable promise, setting fastest lap before retiring with mechanical problems. No one could know that Lancia would influence Ferrari’s fortunes in a most unexpected way.

For 1955, Ferrari revised his cars’ chassis, suspension, and bodywork and coaxed more horsepower out of the engine. The new racer was called the 555 F1 “Super Squalo,” but it was to no avail. Mercedes dominated the season, the “Super Squalo’s” lone victory coming at Monaco.

Soon after the start of the season, racing lost one of its immortals. Two-time world champion Alberto Ascari died at Monza in the wreck of a Ferrari he had borrowed for practice. Ascari was at the time Lancia’s lead F1 driver. Lancia was already experiencing financial troubles, and Ascari’s death was another layer of misery.

In July, after protracted negotiations, Lancia handed over to Ferrari six D50s and the services of engineer Vittorio Jano. Fiat agreed to offer financial support so Ferrari could compete against the German onslaught.

The Ferrari D50 was loaded with innovations. It boasted F1’s first V-8 engine. Its gearbox and clutch were in unit with the final drive. And it wore its fuel tanks as bodyside pods. The tanks’ placement helped in weight distribution and acted as aero-dynamics aids.

Still, it wasn’t enough to unseat Mercedes, and Fangio again won the 1955 world championship. But in the wake of the 1955 carnage at Le Mans, Mercedes decided to withdraw from Grand Prix and sports-car racing.

Fangio came over to Ferrari for the ’56 F1 campaign. The Ferrari D50 evolved, with Ferrari’s men creating a modified body that incorporated the main fuel supply in the tail while retaining the side pods as auxiliary tanks. The suspension was altered, and additional bracing was employed in the engine compartment.

Fangio and the Ferrari D50 claimed the world championship for Ferrari, its first since Ascari’s in 1953. It was a thrillingly tight title charge, the great Argentinean finishing with 30 championship points to 27 for Stirling Moss in the Maserati. Ferrari’s Peter Collins was third, with 25.